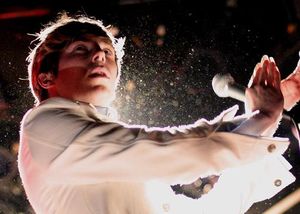 In 2007, Young Love's excellent debut album failed to leave a lasting mark in the pop charts after the band was hailed as Jay-Z's latest big signing. Proof once again that good music and striking new talent doesn't always get recognized due to the lack of proper marketing and radio placement, which is still vital for new acts to succeed in the mainstream.

After touring, touring and touring in the U.S. and Europe, Young Love's lanky frontman Dan Keyes locked himself up in a studio to make some new music together with producer John King from the Dustbrothers. The result of their teaming is Young Love's new album, titled "One Of Us," which will be released in March.

Listen to the brand-new Young Love track "Black Boots" to get an idea what Keyes and King have been spending their time on. It is a confident arena filler with jagged guitars, an anthemic bassline, subtle electro stylings and a very catchy, sing-along chorus. Surprising is that electro breakdown towards the end of the song with some crafty vocal layering and a burping synth effect . Erasure would be so proud. (Head over to Young Love's MySpace page to hear more new tracks.) 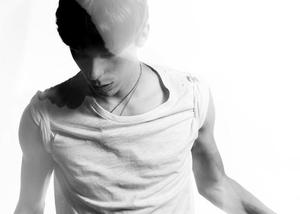 Remember Young Love?  He is that tall and lanky hipster kid from New York City who cranked out an excellent debut album after he was signed by none other than Jay Z to Island Def Jam Records during a hot Miami lunch date.

Young Love is the artist name of Dan Keyes who moved from the Texas prairie to the urban concrete of New York City with just a guitar on his back and a dream of making it in The Big Apple. After working as a waiter in some of Manhattan's hotspots and making ends meet by folding shirts at a Chelsea American Apparel store, Keyes finally got his big break after he befriended Sarah "Ultragirrl" Lewitinn who introduced him to all the right people.

The singer's debut album "Too Young To Fight It" introduced a fresh, high-velocity collection of synth-infused dance rock that unfortunately failed to connect with radio audiences in a big way, but garnered him a steady following of fans in both U.S. and Europe (not in the least because of his energetic live shows). After touring extensively, Keyes returned to the studio earlier this year to start work on his follow-up release.

Together with producer John King from the Dustbrothers (Beck, Beastie Boys), he recorded a bunch of songs for his sophomore record. One of those new songs is the track "Unafraid" that you can exclusively stream on ArjanWrites.com for a limited-time. Keyes serves up more of the infectious and anthemic pop-rock and adds a dose of grit to his delivery.  After touring for months at the time, Keys' presentation and overall musical stylings have roughened up but still posses that dancefloor quality that very much defines his sound.

Listen to "Unafraid" by Young Love: