Uh oh. Somebody's getting trippy over there. Check out a special announcement by MC and soundboard wizard Wallpaper. about a special #STUPIDFACEDD" (aka #WHITEGiRLWASTED) remix package that will be dropping on a computer screen near you very soon. (Make sure to watch the entire video to catch a glimpse of Kay who is her lovely self.)

Wallpaper. (that period is intentional by the way) has been cooking up loads of futuristic pop goodness over the last few months and the banging dorm gem #STUPIDFACEDD is a good indication what to expect from him next.

Call him genius or call him smart, I just like to call him a pop instigator. When you think he has sparked a fire, expect him to hose it down with gasoline to create a firestorm of musical goodness. It's only a matter of time. Tick-tock. 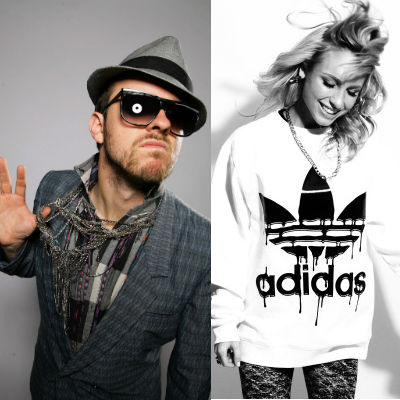 My friends over at Idolator are exclusively premiering a blazing new remix of Wallpaper.'s "#STUPiDFACEDD" that features none other than emerging Canadian pop sensation Kay. It's a hot little number that combines Wallpaper.'s hard-pounding club beats with Kay's girlpower spunk that makes for one rambunctious party anthem. Crank it up and get soaked! (Listen)