Watch 2AM Club "Worry About You" 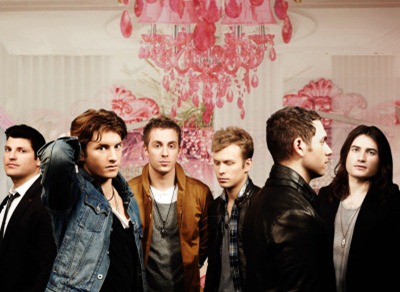 A big congrats to my friends of 2AM Club who premiered the video for their debut single "Worry About You" on AOL Popeater today. After years of playing clubs around country and garnering a steady following of fans, the pop quintet is about to hit the big time, bringing their dynamite pop sound to a much larger audience. They're an ambitious bunch and I'm excited for them that things are finally about to catch fire.

I've championed the group for a while, but if you've missed them before, let me know introduce them again. 2AM Club is the teaming of singer Marc Griffin, emcee Tyler Cordy, guitarist Matt Reagan, keyboard player Dave Dalton, drummer Ian O’Neill and bassist Matt "Sauce" Warshauer. The group originated in Los Angeles where they stirred up a steady buzz with their crazy fun live shows, playing the local college scene up and down the West coast.

Signed to RCA/Jive Record, the group worked with people like Sam Hollander and Dave Katz (Boys Like Girls, Katy Perry, Gym Class Heroes) to fine-tune their genre-crossing pop sound that blends pop, hip hop, soul and a whole lotta fun. It is perfect material for today's iPod generation who like their playlists fresh and familiar.

Check out the video for "Worry About You" after the jump.

Continue reading "Watch 2AM Club "Worry About You"" »

The music of British newcomers Fenech Soler craftfully balances classic synth pop and kicky Euro dance grooves. Watch the video for their brand-new single "Stop And Stare" that is starting to make waves overseas. Think Groove Armada meets Alan Braxe. In fact, it was Braxe who first spotted the group and released their debut single "The Cult Of Romance"on his Vulture label last summer. Look out for the release of "Stop And Stare" in the U.K. on April 19. The single comes with remixes by Jaymo & Andy George, Mighty Mouse, Tony Senghore and Reset.

Leave it up to Dan Black to mix and mash different genres to serve up a brilliant slice of indie pop. Check out a re-make of his gorgeous "Symphonies" that includes rhymes by hipster fave Kid Cudi. The song also features chopped up, orchestral samples of 1984's Starman film score, which gives the track such a classic, stylish feel. Directed by Chic and Artistic, this new video is a piece of art on its own with several nods to famous movies, including James Bond and Blade Runner. "Symphonies" airs tonight on IFC but preview it right now, right here on ArjanWrites.com. Download the track here.

Check out the amazing video for Japayork's excellent new single "Our Now." Besides being a visual artist, remixer and producer, Japayork is also a gifted new electro-pop talent that you should keep your eye on in 2010. "Our Now" perfectly showcases what Japayork is all about with its gorgeous, synth driven melody supported by a throbbing beat that comes with a very creative video (that was produced by Japayork as well). Highly recommended.

Sweet Anya Marina takes the sting out of T.I.'s "Whatever You Like" and creates a soothing new version. Directed by NYLON Magazine, the video was shot at Babeland's SoHo store in New York City. And yes, those are cameos from Justin Kirk (Weeds), Daniel Vosovic (Project Runway) and Michael Stahl-David (Cloverfield). Click here to download Anya's version of the song, currently available on iTunes. Also, look out for Anya on the upcoming New Moon soundtrack.