Listen to Uh Huh Her "Not A Love Song" 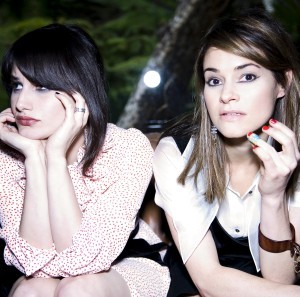 Uh Huh Her is the hotness. The emerging electro duo from Los Angeles combine lush vocal harmonies with multi-layered instrumentation and emotionally-charged melodies. Plus, thhey look like they stepped right off a Wallpaper photo shoot, which only adds to the ear candy that is their music. If you opt for sweet & crunchy than Uh Huh Her is your kinda thing.

The two started collaborating together after friends introduced them. They immediately created a music bond that resulted in Hailey and Grey began making music together at the beginning of 2007 that led to their debut EP "I See Red." Since the, the group has been working on their full-length debut that will be out in stores on August 19.

The group says in a press release that their debut turned out a lot more poppier than they initially thought. We wrote a lot of it before we went in the studio, but we wound up re-cutting everything," Grey says of the 11-track album. "We wanted to make a commercially appealing record. Sometimes the song just calls for it and you can't fight the pop," Hailey laughs. "I like that it's eclectic and not just one thing. That bores me in a record. We never wanted this band to be small."

First single from the group's debut album is "Not A Love Song," which you can sample in the ArjanWrites.com music player below.