Dutch super DJ Tiesto is cashing in on his global success by signing several high-profile endorsement deals with prominent liquor and electronics brands. For his partnership with Sandisk, he produced the track "Work Hard Play Hard" that the memory card maker is giving away on their web site. It is a pulsating dance-pop track that features the spunky vocals of Kay. The track shows off Tiesto's "poppier" new direction moving away from the big trance epics that made him famous from Goa to Groningen. Fun little track and hands up to Sandisk for supporting the Dutch - so to say

Watch Tiësto feat Sneaky Sound System "I Will Be Here"

Check out the brand-new video for Tiësto's much-anticipated new single, "I Will Be Here." The Dutch powerhouse DJ partnered with Australian pop outfit Sneaky Sound System on this new effort. I'm not loving the song, but I'm liking the video.

Tiësto has teamed up with acclaimed Japanese director Muto to create the music video for "I Will Be Here." With over 20 years of experience, Muto's works are renowned for their impact, scale, colorful imagery and he is synonymous with creating the visual styles for some of the biggest names in the music industry (Death In Vegas "Scorpio Rising" Feat Liam Galigher) as well as heavyweight brands like Pepsi, Honda, and Sony.

When asked about "I Will Be Here," Muto said,  "It was interesting to see how Tiësto's music could be incorporated into the essence of Tokyo. One of the main elements of this, is the hard working ethic of the Japanese office worker. he works until the late hours of the night and until the song is over, then he goes to sleep. Everyday is the same routine for him, like working the late night, taking the subway and following the same course... in many ways, he's like a robot, but this time he's got a special mission. He needs to spread Tiësto's sound through the streets of Tokyo, injecting energy into the gray buildings and streets."

"I Will Be Here" is taken from Tiësto's fourth studio album, titled "Kaleidoscope," which will be out in October and features collaborations with Nelly Furtado, Jónsi of Sigur Rós, Kele Okereke of Bloc Party, Nelly Furtado, Calvin Harris, Tegan & Sara, Emily Haines of Metric, Kianna of Tilly & The Wall. 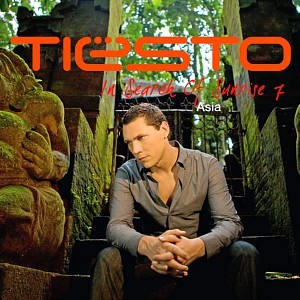 Tiesto is one of the most down-to-earth artists I've ever met. It's hard to imagine that this calm, cordial and soft-spoken guy is able to stir up a wild frenzy on dance floors around the world with his heart-racing, high-energy DJ gigs.

On June 10, Tiesto will be releasing his newest double disc mix compilation, "In Search Of Sunrise 7 - Asia." The "In Search of Sunrise" series is inspired by the DJ's travels through various countries and have included stops in Latin America, Los Angeles and Ibiza. Mixed and recorded in Thailand, "In Search of Sunrise 7 - Asia" promises to capture the "peaceful and intensively passionate way of life" that Tiësto encountered during his tour in Asia.

In other words, the disc set will serve up more of Tiesto's thumping and mind-altering trance sound that has made him one of the most prominent DJs in the world. Head over to Tiesto's web site to get a behind the scenes look at the mixing and recording of the CD at his amazing beachfront hotel in Thailand. That view will surely get anybody inspired to do some amazing things.

Included on the compilation is an exclusive remix of Cary Brothers' new single, "Ride" that Tiesto would like you to have as a totally guilt-free MP3 download. Fans should make sure to experience Tiesto during his current U.S. tour. Get cities and dates here. (Click here to purchase "In Search Of Sunrise 7 - Asia.")