Watch "Every Passion Has A Road" SXSW Web Series 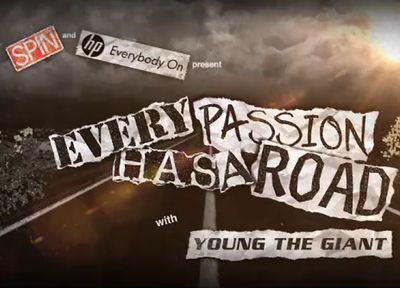 South by Southwest is less than a week away and I will be heading to Austin to share all of the musical excitement with you. Lots of my favorites will be performing including Frankmusik, Neon Hitch, Jared Evan, The Naked and Famous, Penguin Prison, Jessie & The Toy Boys, The Sounds, Bright Light Bright Light, Tinie Tempah, Ellie Goulding, Zowie and many others.

I'm partnering with the fine folks at HP to bring you all of the coverage on the blog, Twitter and Facebook. In preparation for South by Southwest HP and Spin Magazine are collaborating on a very cool web series that showcases three up-and-coming indie bands that are gearing up to play South By Southwest for the first time while demonstrating how HP and Beats Audio technology enables their journey. The bands include Young the Giant, Yellow Ostrich and Rural Alberta Advantage.

The first two episodes of "Every Passion A Road" features Yellow Ostrich and Young The Giant, an excellent quintet from Califoria who have opened for the likes of Kings of Leon and The Killers. Watch their journey after the break. Catch new episodes every day on HP's YouTube Channel. (A big thank you to HP and Beats Audio for supporting my passion to bring live coverage from South by Southwest , March 16-20.) 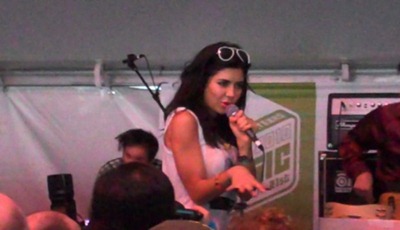 South by Southwest 2010 in Austin, TX was an explosion of exciting new music. In venues, large and small, hundreds and hundreds of acts gathered for the past four days to play for thousands of music fans, peers and industry insiders. The music festival has become a place where new talent gets noticed, and it can serve as a platform for them to propel from obscurity to bigger notoriety.

I had a fantastic time in Austin. Great to see so much live music in one place and to meet so many like-minded people and fellow bloggers who I have corresponded with for so long but never met in person. (Even my hotel debacle could not spoil the fun. Never!)

There were many acts that I looked forward seeing and there were also a bunch of new artists that I had discovered. Look out for more audio, videos and a few interviews in the next few days. Below a run-down of some of my favorite acts I saw at the festival.

Matt Morris – My fellow OUT 100 honoree Matt Morris played a few showcases, including a private showcase at Austin’s downtown Presbyterian Church. Morris’ performance was simply breathtaking. Playing together with a full band (including a violinist), the church’s acoustics made Matt’s vocals soar  - it was like hearing an actual CD recording. He played all of my favorites, including “Bloodline,” “Money” and “Love.” Matt has so much soul, I could feel every word he sang. Simply flawless. Simply perfect. I was truly touched by his music. (web site)

2AM Club – This Los Angeles band is my favorite new pop act to look out for this year. These guys are so ready for the big time. Filled with infectious hooks and great melodies, their songs are ready for radio now. I’m sure it will be only a matter of time before you hear them on an FM station near you. I saw them play at the Phoenix on Friday. Super tight set. Great energy with Mark’s spotless vocals and Tyler's punctuating rhymes. Having both a lead vocalist and lead MC totally works for them.  Look out for audio of my interview with 2AM Club very soon. (web site)

Marina & The Diamonds – After meeting her for an interview at the Hilton Hotel, I saw Marina & The Diamonds perform twice. My favorite gig was the smaller, intimate Chop Shop/Atlantic Records showcase (see photo above). Marina is just like her music. Sassy, sometimes cheeky and super fun. What really strikes me about her is that she doesn’t try to hard. She just has fun with the music and it made her shine. She has lots of great personality and is a compelling performer. Look out for audio of my interview with Marina very soon. (web site)

V V Brown – V V played a bunch of shows, including the AOL Spinner Pop Up show. Performing in front of a gigantic billboard of her album cover, V V performed all the crowd favorites, including “L.O.V.E,” “Game Over” and “Shark In The Water.” V V saw me in the crowd and gave me a shout out at the end of her set, super cool. Love ya, lady! She just started her tour with Little Dragon this week so make sure to go see her. (web site)

Scars on 45 – Brand-new band from New Castle, England who put out a gorgeous, atmospheric brand of pop rock with male and female singer. Reminded me of Eastmountainsouth. Very good. (web site)

Mike Posner – Newcomer Mike Posner brings an interesting hybrid of pop, dance and hip hop to his music. Stuart Price has been talking with him, and he has been working with Benny Bensassi on his forthcoming debut. He is one of the biggest talents to look out for this year. Look out for audio of my interview with Mike very soon. (web site)

Electrolightz – The crazy fun  L.A. based outfit brings on the party with their mesh of pop and dance. Super cool guys too. We shared a hotel shuttle on Saturday and had a very interesting chat about the state of pop. Look out for audio of my interview with Electrolightz very soon. (web site)