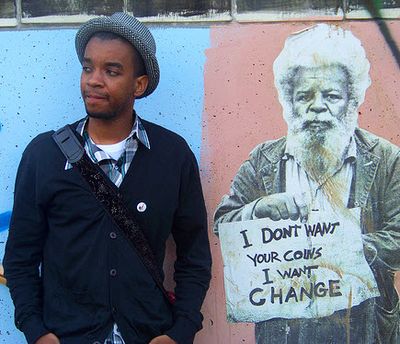 I'm so excited for my ATL buddy Spree Wilson. He has almost finished his debut album, titled "The Beauty Of Chaos," and will be shopping it around all the majors to get a big release. Several have shown interest so let's see where he ends up.

Spree is part of a new breed of artists who are part of an exciting new generation of melody makers. It's a forward-thinking group who grew up with pop, rap and hip hop, and are inspired by some of the timeless rock music of the past. People like Janelle Monae, Novel and Chester French are part of that same crop, not limiting themselves to just one single genre in their endeavors.

Check out a demo cut from Spree's new album that shows off his upbeat, soulful side. He's an emcee who spits out rhymes like De La Soul and works the guitar like young Vernon Reid. And I love his lyrical wit with lines like, "Heartbreak stew is the dish/and you can always go for seconds if you wish." Being comfortable as the underdog, Spree's optimism is infectious. Very promising stuff.

Two ArjanWrites favorites made the pages of Vibe's October issue. Chester French is starting to catching on (slowly but surely), and Atlanta-based genre buster Spree Wilson will soon follow. (via Chesing) 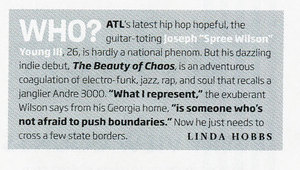 This is not your regular ArjanWrites fare, but I just wanted to take a moment to introduce you to Alien, one of Atlanta finest and most talented drummers.

This video was recorded a few weeks ago during a performance with Spree Wilson. The two went off on an extended jam to create some rock 'n roll magic. Try to focus on Alien's drum solo for a minute or so and you'll be hypnotized by it. He roars, rips and totally rocks it with his wild, yet totally controlled drum acrobatics.

In a Billboard chart ruled by big, fat synthetic beats and other slamming soundboard effects, it is good to see that there are also drummers out there who can actually create those same sounds on stage the old fashioned way.

There are not a lot of artists that actually define what this blog is all about. Artists that are both sweet and cruncy. Music makers who come from a familiar place but take their sound to a new level that is exciting, new and has a bunch of crunch. They remix the past and bring their own original point of view that makes you stop and listen. Chester French and Janelle Monae are some of the artists that recently gave me that feeling.

And now there is Spree Wilson.

Utterly humble and down to earth, the Nashville native rocks the stage with his quirky rhymes and an energetic stage show. I saw Spree perform in Atlanta on Tuesday together with some of the other Radiant Kids, a troop of emerging MC talent. I truly enjoyed his performance. It kicked off with a jam session with his insanely good drummer Alien who took the set into another stratosphere. He hits the cymbals like Hendrix touched his snares with a passion and precision that is infectious.

Spree played familiar tracks like "Dreamworld" (MP3) and "Bring Me Down" and mixed it with one his new joints, titled "Words," which was produced by Kanye West's mentor NO.I.D. The track was intended for Lupe Fiasco, but Spree took first dibs and ran with it. This synth-driven tune might be a bit out of the scope of Spree's canon, but what I find so compelling is that this MC with a guitar does not feel limited to one certain mold. "I'm just a mistfit with some bright ideas," he rightfully proclaims in the song.

I'm comfortable boasting when I believe somebody is the real deal. And Spree is just that. Sweet and crunchy with a style of his own. I'm stunned this guy is not signed yet. All you Interscopes and Atlantics of this world should wake up and smell the music. It's a new day.

I think music is better when you blend it. Whether it is sweet or crunchy, or sticky and sweet, hot new music is created when artists dare to experiment and think out of the box.

He's one of the fastest rising artists on Atlanta's bustling music scene and a hot new talent that I'm really excited about. His happy-go lucky flow, punchy delivery and genre-crossing style is inspired by everything from The Beach Boys to Outkast, and from The Beatles to Bob Dylan. Together with artists like Janelle Monae, Wilson brings a distinct new sound to Atlanta that has incredible crossover appeal.

It's hip hop, it's pop, it rock, it's whatever you want it to be really.

In an interview with Atlanta's Creative Loafing, Wilson explains that he was considered a sell out when he listened to bands like The Beach Boys, Nirvana and R.E.M while growing up. For a while, he tried to catch on with the majority but  he realized he rather did his own thing. ""I always cared about what other people thought," he says. "Then in the last couple of months, I just came to a point where I don't give a fuck. And you know what I realized? It makes my music better," he says.

He adds, "When you're fearless, it makes your music better." Amen to that. Check out Spree's track "Dreamworld" (with Novel on vocals). Great beat. Major flow. Tremendous potential.