There's something about Sky. Charming, casual, coy and a little goofy (and I mean that lovingly), this rapidly emerging pop siren is being hailed as one of pop music's most promising new talents. And that claim certainly should not come as a surprise. At only 18 years old, the Hollywood singer has already collaborated on tracks with some of the biggest names in the business including Linda Perry, Greg Kurstin, Dallas Austin, Nicole Morier and Swedish production duo Bloodshy & Avant who first discovered her.

Ferreira is currently prepping her debut record that is slated for release on the magical date of January 11, 2011. In the meantime, we will be treated to more of Sky's music. In the U.K. she is stirring up a storm with the incredibly catchy "One," while her debut single in the U.S. will be "Obsession." (The digital-only "17" that came out in May was intended as a tastemaker.)

I caught up with Sky in an exclusive interview via video to chat about her new album, how she ended up working with all of those hit writers and the sobering reality of the business side of music. On her way to the location of the interview in New York, Sky ended up in a major downpour that gave us a bit of a slow start, but things warmed up nicely throughout the interview. Make sure to watch the entire piece in which also reveals some interesting thoughts about gays, Madonna and Robert Patterson. Watch Sky's phenomenal video for "One" after the jump.

Sky Ferreira Premiers Video for "One"

Sky Ferreira's much-anticipated video for "One" popped up on YouTube right before the kick off of the long holiday weekend here in the U.S. Directed by renowned photographer Ranking, the video is a stylish affair that does a fine job of introducing this emerging new pop sensation to the masses. I still prefer Sky's older and experimental work (like that amazing Miike Snow cover), but "One" is potent pop fare that steadily positions her for major chart success.

Ready to Pop: Listen to Sky Ferreira "One" 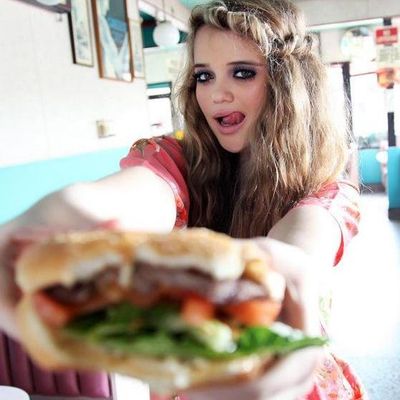 "If you want a hit, you go to Sweden," is what Sky Ferreira must have thought when she plotted her global chart takeover. She ended up in the caring hands of Bloodshy & Avant, the savvy Swedes who have penned mega hits for Madonna, Britney Spears, Jennifer Lopez and other iconic divas.

The result of their collaboration is the song "One," and it turns out to be exactly the type of Robyn-inspired pop that will have purists say "yay" and fans everywhere scream "hurray." Still finding her go-to-market groove, "One" sure is undeniably catchy and incredibly well put together.

If you're new to Sky make sure to listen to some of her other music as well. The classically-trained singer serves up a distinct point of view who has a lot more spunk up her sleeves than "One" may have led you to believe. Eclectic, quirky and smart, songs like "Happy Dre" and "Femme Fatale," prominently display how versatile she is - revealing that catchy electro-driven pop is only one of the many arrows on her bow. 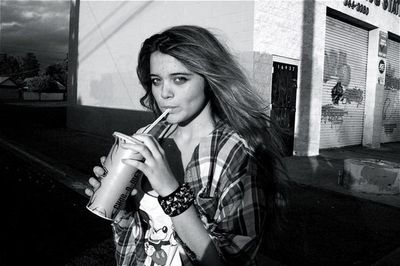 The new year is almost upon us and with it comes a whole bunch of new artists pitching for space on your playlists. Into this maelstrom of Ellie Goulding, Reni Lane, Janelle Monae, Mini Viva and many others steps the prodigiously talented Sky Ferreira.

She's 17, from L.A. and gearing up to unleash her self-proclaimed "revolutionary pop album" on the world. It's chock-full of planet-sized potential hits, co-written by Sky in collaboration with the likes of Bloodshy & Avant, Greg Kurstin, Paul Epworth, Dallas Austin, Nicole Morier and Linda Perry. Not too shabby for your very first outing.

So who is this very special new talent? Her story really started when she wrote her first song at age 15  after an internet break-up. She describes that first song as her version of "Careless Whisper" in outer space. Interested in both music and fashion, Sky eventually set her sights on making music and reached out to hit maker Bloodshy on MySpace. He answered her message and decided to take her under his wing.

One of the most striking feats about Sky Ferreira is her gut-wrenching vocal delivery. Trained in gospel and opera, she has a vocal range similar to Mariah Carey and Leona Lewis, but she mixes in a whole lot more spunk and gusto. Head over to her MySpace page to get a taste of Sky. You must hear the '60s-inspired "Femme Fatale" that was produced by Greg Kurstin and shows off Sky's confidence and unique style that contrasts nicely with the pop tarts she's surrounded with.

Also, listen to her acoustic cover of Miike Snow's "Animal." Would you guess she's only 17 years-old? It sounds she lived the lifes of many and speaks from direct experience. Sky Ferreira is a name you need to remember. What do you think of Sky?