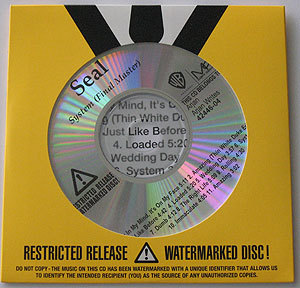 I had a chance to listen to a restricted release copy of Seal's new album "System" once before I had to jump on a plane to Las Vegas yesterday.

I took to the CD with me to write up a Sneak Peek review, but the CD will not play on my laptop, the CD player here in my hotel room or even in CD player of my rental car! I get the point of watermarked, restricted CD copies, but this is a little silly. It shouldn't be this hard to get a CD to play. I get watermarked discs often, but this Seal one seems to be particularly stubborn.

In any event, it is sounding pretty good, a lot more dance-oriented than his previous two albums,  but I don't want to draw any conclusion until I hear it at least one more time. I can tell you that the song "The Right Life" will be the next single from the album that follows Seal's current single "Amazing."

I'm meeting up with Seal later next week for BRAVO TV so if you have any burning questions, feel free to shoot. I need your questions before Wednesday.

San Francisco's Kaskade is without question one of my favorite DJs right now. As a talented songwriter himself, he knows how to properly mix up a house beat with emotive vocals and a hooky melody to create an organic brew that is often as much pop as it is dance music.

After remixing Justin Timberlake's "LoveStoned" (get a guilt-free MP3 here), Kaskade has done another fine job with his remix of Seal's new single "Amazing."

He infused the original with a subtle house beat and put extra emphasis on the uplifting chorus with some glowing synth effects to create a very lush new version. I saw Kaskade play this remix in Atlanta last weekend and the crowd went nuts for it.  (Thanks to Jordy for the heads up.) 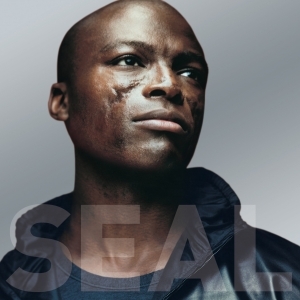 No people. It wasn't a fluke. Seal's really back.

Pete Tong premiered the Thin White Duke remix of Seal's new single "Amazing" on his BBC radio show last night. The show also aired on XM satellite radio here in North America. The Thin White Duke is, of course, none other than Stuart Price with whom Seal worked on his entire new CD. (More about that here.)

Consider this remix as a bit of a taste maker for what's to come from Seal. I'm very curious about the vocal edit of "Amazing," but this remix sure gets me excited about the singer's collaboration with Stuart Price. Listen to radio stream of Tong's entire radio show here on scroll to the 6:30 minute mark to catch the remix.