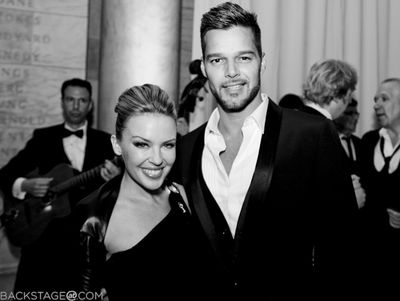 On Thursday night, Kylie Minogue hosted the inaugural Inspiration Gala at the New York Public Library. The event was organized in support of amfAR, an organization that is dedicated to ending the global AIDS epidemic through innovative research. The glamerous black tie/black leather gala honored Ricky Martin for his extensive philanthropic work and Jean Paul Gaultier for his contributions to "menswear and his enduring humanitarian spirit."

Looking fine and flawless, Kylie noted that she recently collaborated with Gaultier on the visual aesthetic for her forthcoming new album, "Aphrodite."

It was good to see Ricky Martin lauded for all of his hard work to advocate the well-being of children around the world. The singer established the Ricky Martin Foundation in 2000 to provide social justice, education and health to children in an effort to fight child exploitation and human trafficking.

In his acceptance speech,  Martin dedicated his Inspiration Award to a thirteen year old girl he met three years ago in Cambodia who was forced into prostitution and contracted HIV. Thanks to the work of his foundation, UNICEF and many volunteers, the girl is safe and in good hands now. "This award is for her," Martin concluded. "This award, I’m going to take to Cambodia again. I’m going to give it to her.” (Watch Ricky Martin's speech here.)

Also in attendance at the star-studded event were Cyndi Lauper, Kelly Rowland, Simon Doonan and a troope of male models who were featured in a runway show to showcase designs from Band of Outsiders, Y3, Calvin Klein, Marc Jacobs, Tom Ford, D Squared 2, Bess and many others.

Click here to see some gorgeous, exclusive backstage shots of the event courtesy of Kevin Tachman. 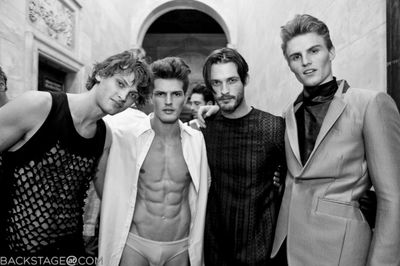