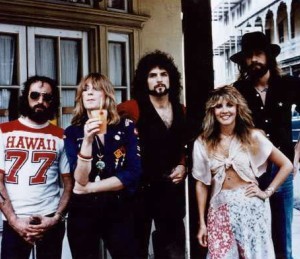 Listen to Tom Croose's gorgeous new remix of Fleetwood Mac's classic "Never Going Back Again" that is taken from their 1977 hit album "Rumors." Brooklyn-based Croose (aka John Paul Jones) turned the brilliant original into something that is as equally blissful and good. A very exclusive, limited vinyl single of the track is available for purchase on the Phonica Records web site. New Yorkers interested in Tom Croose should check out his weekly DJ gigs at Macri Bar in Williamsburg.

David Guetta's "Love Don't Let Me Go" was first released in Europe in 2003. I really enjoyed the song and the video when I saw it played on music television in Europe a few weeks ago. Guetta is one of France's most popular DJ/producers and a leading force in the hip French house movement. The song is included on his 2004's album "Blaster" that also features Ibiza's big summer anthem "Just A Little More Love."

Directed by Olivier Boscovitch and Vincent Renaud, the video for "Love Don't Let Me Go" (with Chris Willis on vocals) is pure out-of-this-world coolness that even brings solar dust to life. On  a related note, if you're visiting Paris, make sure to check out Guetta's Les Bains Douches nightclub, a converted Turkish bath house designed by Philippe Starck. Oh la la. [source]

Rewind: Madonna and Nick Kamen "Each Time You Break My Heart" (1986)

Madonna likes to keep her finger on the pulse. The diva has always had a fine sense of what is in vogue and what is not. No wonder she teamed with hot model/singer Nick Kamen after he shot to fame in 1986. Stripping down to his white boxers, Kamen gained worldwide notoriety in 1985 when he appeared in the famous (and very gay) laundrette commercial for Levi's.

Madonna picked up on the hype surrounding the advertisment and admitted in a BBC radio interview in 1986 that she was inspired by Kamen's "charisma" and "beautiful voice." She volunteered to write and produce the song "Each Time You Break My Heart" for Kamen. Madonna also makes a cameo in the song, singing background vocals in the bridge of the song towards the end.

The song's production is identical to the sound Madonna put out at the time of "True Blue" in 1986 with its (computerized) rhythm section and punchy synth bass. Madonna's involvement is obvious when you compare the instrumentation of "Open Your Heart" to "Each Time You Break My Heart."

Check out the original video for the song. Also stream the very entertaining, 37 minute BBC radio interview with Madonna that starts out with the singer describing how she got involved with Kamen. After that she talks about her upbringing, the importance of discipiline and her marriage to Sean Penn. If you interested to learn more about Nick Kamen, you can visit his web site with photos, audio clips and more.