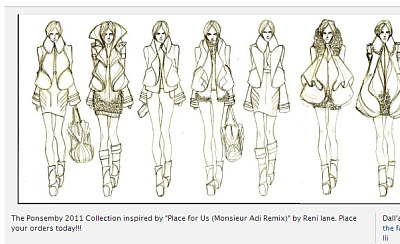 This is a little mind blowing and totally amazing! Leo, a young designer from New Zealand, was so inspired by Monsieur Adi's magnificent remix of Reni Lane's "Place For Us" that he designed an entire fashion collection based on it. Epic meets elegance. The designer's Monsieur Aid-Reni Lane collection comes with a line of accessories as well, including "Place For Us" handbags (A Reni bag and an Adi bag). How incredible is that? I introduced Monsieur Adi to Reni Lane last year and I'm so glad I did. It's proof once again that music and the reach of social media can create beautiful things. 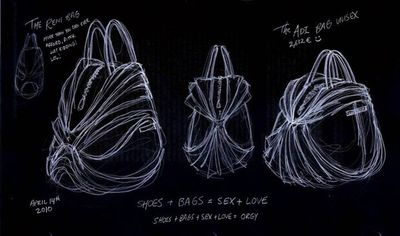 Finally! Superfraiche alum Reni Lane has her "Ray Of Light" moment in this very cool video for her debut single, "Place For Us." Frequent readers of this blog know that I have been raving about this track and posted several remixes after it first hit last summer. I just love the spirit of the song. It is a freedom anthem, it is a song about coming into your own and staying there. Totally love how the video captures that energy and meaning of the song.

The video was produced by the German production team Philipp Fehling, Jan Scholz, Frank Hoffmann in cooperation with"Mutter und Vater Filmproduktion and Das Werk Berlin who previously created a video for the Glitter & Blitz remix of "Place For Us."

Fellow Superfraiche performer Brad Walsh recently remixed the track as well and gave it a nice electro twist. Download that revamp totally guilt-free. Look out for Reni's debut album "Ready" to hit digital download stores next week. In the meantime, do yourself one, mighty favor and download the radio edit right here, right now. 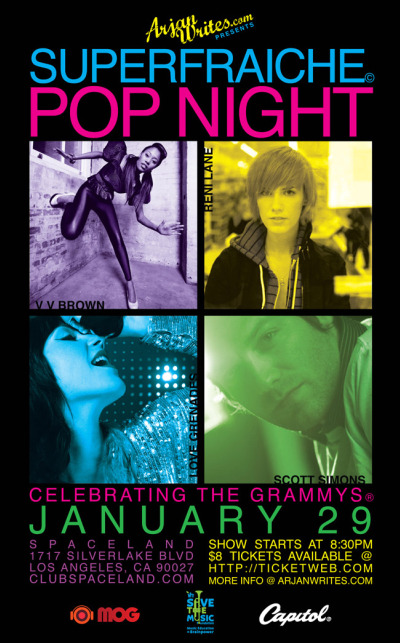 Very exciting news! In celebration of the 52nd GRAMMYs, I have put together a very special Superfraiche Pop Night in Los Angeles on Friday, January 29 at Spaceland. After successful Superfraiche Pop Nights in New York City, I'm thrilled to take the event to the West Coast. Tickets are available now on Ticketweb.com.

Proceeds of the event will benefit the VH1 Save The Music Foundation that is dedicated to restoring instrumental music programs in public schools to ensure that all children have access to a complete education.

ArjanWrites.com’s Superfraiche Pop Night L.A. will be held at Spaceland, 1717 Silver Lake Boulevard, Los Angeles, CA 90026. Show will start at 8:30PM. Hope to see you there!

V V Brown – British "pop fantasia" sensation V V Brown is one of the hottest new female voices to look out for in 2010. The singer serves up a retro-styled brand of pop that is both soulful and incredibly hooky. Arjan nominated V V Brown for the MTV Logo NewNowNext Award in 2009. V V is set to release her debut “Traveling Like The Light” on February 9.

Reni Lane  - Signed by super producer Linda Perry to her Custard / Universal Motown label, this spunky and super fun singer is stirring up crowds with her debut single “Place For Us,” an infectious slice of alt pop rock. VH1 selected the track as the theme of their saucy new hit series Secrets of Aspen. Her major label debut “Ready” drops March 16.

Love Grenades  - Love Grenades is one of the hottest new things to come from the Hollywood music scene. These Sunset hipsters put out a distinct brand of sultry disco-pop that is championed by fellow L.A. hitmaker Sam Sparro.

Scott Simons - Piano pop balladeer Scott Simons has shared the stage with pop artists ranging from One Republic to Keane. Scott’s version of Rihanna’s “Umbrella” was a viral internet and radio hit, garnering over a million plays on MySpace and rotation on radio stations all over the US and abroad. In addition to his own artist career, Scott is also a professional songwriter living in Los Angeles.

The goodness just continues to roll in.

Reni Lane was an amazing performer at Superfraiche. Love that woman! She has so much spunk, energy and such a refreshing attitude that we need much more of. During the performance of "Place For Us" she jumped off the stage and ran through the crowd with her wireless mic. Totally crazy, but totally fun.

I know I'm gushing but her stage presence is infectious and her vocal delivery is flawless. Make sure to grab a copy of her Custard/Universal-Motown debut LP early next year.

In the meantime, watch a mind-blowing video montage that German video mixers Philipp Fehling, Jan Scholz and Frank Hoffmann produced in cooperation with "Mutter und Vater Filmproduktion" and "Das Werk Berlin." This piece of art is set to the Glitter & Blitz remix of "Place For Us" that you can download totally guilt-free right here.