I finally managed to get all my Coachella photos uploaded to Flickr. Check out the entire album of pictures here or jump directly to Scissor Sisters, Mylo, Kanye West, Madonna, Depeche Mode, James Blunt, Infadels and Imogen Heap. I never wrote that Kanye West played a-ha's "Take On Me" to stir up the "white crowd," as he said. That was hot. 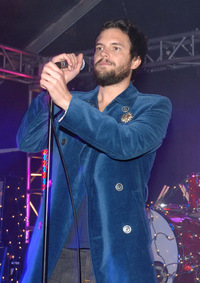 It looks like someone has been locked up in a studio for the last few weeks to record a new album... Check out more photos of Brandon Flowers and the other Killers performing at the GQ Man Of The Year Celebration on The Killers Network. [Source] 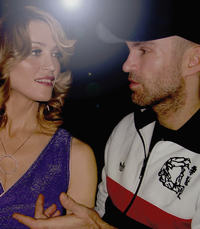 Snap shot of Madonna and DJ Peter Rauhofer at Roxy on October 22 when the superstar attended to club to promote "Confessions On A Dancefloor." (Thanks to star69 for sharing!)

Music Makes the People Come Together 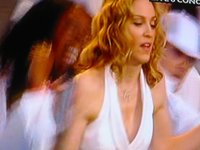 I'm in London today. Just saw Madonna in Hyde Park. This is how a message comes across. This is how entertainment is done. Period.

The Killers Live at Music Midtown 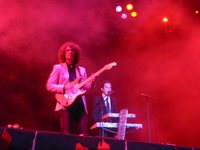 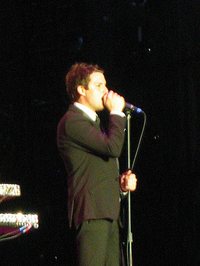 The Killers performed tonight at Music Midtown in the pouring rain for a cheering but soaking audience. Atlanta's annual music festival also featured appearances by the White Stripes, the Pixies, Keane, Bloc Party and over 150 other acts. The Killers performed songs from their debut "Hot Fuss" and also threw in the brand new song "All The Pretty Faces."

After last week's party in NYC, the friendship between the Killers and Louis XIV continued in Atlanta. Killers' drummer Ronnie joined Louis XIV on stage playing guitar on "Finding Out True Love Is Blind."

Click here to see more photos from the Killers at Music Midtown.