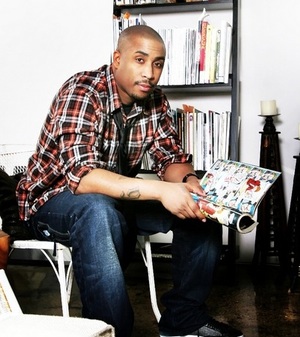 Novel is one of the most exciting fresh new soulful voices to keep your eye and ear on.

The multi-talented singer.songwriter has been working behind the scenes for years,  writing and producing songs for acts such as India Arie, Alicia Keys, Lauryn Hill, Leona Lewis, Kelis, Stacie Orrico, Beyonce, Monica, JC Chavez, Raphael Saadiq, Rob Thicke, Joss Stone and many others.

Now the time has come for Novel to step into the limelight and share his chops as a solo vocalist. Signed to Dallas Austin's Rowdy Records in Atlanta, the singer released his EP "I Am" on iTunes late last year as prelude to his full-length debut "The Autobiography" next month. Make sure to listen to the melodic title track of that EP that features Ben Folds, Talib Kweli and Spree Wilson.

A special Valentines Day track surfaced on OnSmash this week that was originally recorded for a mixtape by Novel during his days with Interscope. Check out "Good Luv" that showcases Novel's incredible talent. He riffs, jams and tears it up. Effortlessly and flawlessly. (Photo by Brad Walsh)