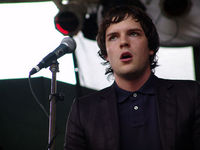 The most recent issue of NME reports that Elton John had the Killers over for dinner last month."The Killers have firmly established themselves in the rock aristocracy after dining with Sir Elton John (. . .)  Las Vegas' finest first met the piano-tinkling superstar backstage in Paris after he asked the band to perform as part of a television special. Elton took a shine to the Killers and arranged to take Brandon Flowers and the rest of the group out to dinner when he was next in Las Vegas. NME can now divulge that Elton and the group met up recently [February 15] in a Vegas hotel suite where they dined on sushi.(via Killers Daily News) 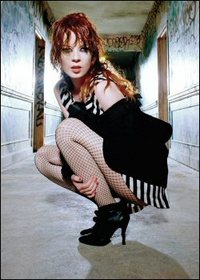 Listen to Garbage "Why Do You Love Me" [WMA] [Real]

This is Garbage's first single since the 2001 release of "Beautiful Garbage" (right before 9/11). It is taken from the band's upcoming fourth album "Bleed Like Me" that will hit stores on April 11. On this new track, the band returns to its roots with a radio-friendly, straight-up rock tune featuring Manson's vampy vocals and Markers' flaring guitar riffs.

Listen to Blue Merle "Burning In The Sun" [WMA] [Real]

Blue Merle is a handsome Nashville-based quartet that released their debut album last week. But this is anything but country. Produced by Stephen Harris (U2, Dave Matthews Band), this title track showcases singer/songwriter Luke Reynold's distinct tenor and the band's sophisticated arrangements that include a wide variety of instruments.

The Doves are twin brothers Jez and Andy Williams and school friend Jimi Goodwin. Their new single "Black & White Town" reminds me of an old Tears For Fears tracks with that elegant Britpop feel that is at times reminiscent of Motown soul. Interestingly, the song was inspired by the city of Manchester, which can easily be considered England's own Motown. Taken from their upcoming album "Some Cities" (out March 1, 2005).

Aqualung has been described as Rufus Wainwright meets Radiohead meets Coldplay. Check out their new single "Brighter Than Sunshine" from their forthcoming album "Strange & Beautiful." The tune is a moody, piano-driven ballad that pleases at first listen, but becomes rather bland after repeated play.

In my mailbox this week: Moby "Hotel" and Shelby Lynne "Suit Yourself." I hope to Sneak Peek reviews both of these albums soon. 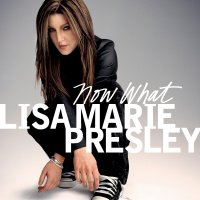 This is the official album cover of Lisa Marie Presley's new record "Now What," that will hit stores on April 5. Find a larger version of the sleeve art on Flickr. I've always thought of Presley as a chick with balls who is not afraid to speak her mind. This record is no different with Presley letting it all hang out.

Living in the spotlight since she was born, the first single "Dirty Laundry" is a fierce statement against the excessive news media. Presley is unflinching yet sensitive on songs like "Idiot" ("Please remember me, forever believe in me, as someone who's never gonna wish you well") and "Thanks" ("And here's to the next time I wrap myself around a tree, I know that you'll be there with bells on to pull me off"). She also duets with Pink on the track "Shine."

The tracklisting nicely sums up the mood of the album:

Tracks and the City 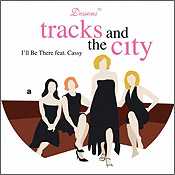 One year after the series came to a close, HBO's Sex And The City continues to inspire. "I'll Be There" by dance outfit Tracks And The City marks the official 50th release of Dessous Records. The sexy German label was founded by house DJs Alexi and Vincenzo in 1998. The people behind Tracks And The City are a well-kept secret (Carrie, Samantha, Miranda, Charlotte perhaps?). Only guest vocalist Cassy is named at this time who is well-known for her appearance on Steve Bug's "Loverboy" rework.

The combination of Cassy's subdued diva vocals with the downbeat, dark house bassline creates a frisky groove that will fit any dancefloor. (Click here to download "I'll Be There" from iTunes.)

Listen to "I'll Be There" by Tracks And The City feat. Cassy 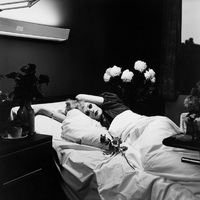 Candy Darling was a major part of Andy Warhol underground art clique in the 1960s. She starred in some of Warhol's movies and also inspired Velvet Underground classic "Candy Says" and Lou Reed's solo hit "Walk On The Wild Side." Most importantly, she continues to be a major inspiration for transgender artists, drag queens and transvestites today.

Candy Darling has also influenced the music and visual art of androgynous singer Antony. The album cover of his latest "I Am A Bird Now" includes the famous 1974 photo of Candy Darling by Peter Hujar. The photo was taken in New York's Cabrini Hospital days before she died.