Ne-Yo worked with his GRAMMY-winning producer pals of Stargate (Rihanna, Beyonce, Jennifer Hudson) on a new track for Leona Lewis. To give Leona an idea what it needs to sound like, Ne-Yo sang the vocals on the demo, giving us a good taste of what direction Ne-Yo and Stargate are taking it. It's a super slick, soulful track that incorporates a sleek '90s-style club effect that is incredibly catchy.

I met Tor and Mikkel of Stargate at the GRAMMY Awards in February and they are the nicest guys. They continue to have their finger on the pulse of what's hot and coming in pop. This sound could very well be what chart-topping pop will sound like in 2010.

A Peek Inside Ne-Yo's Atlanta Studio 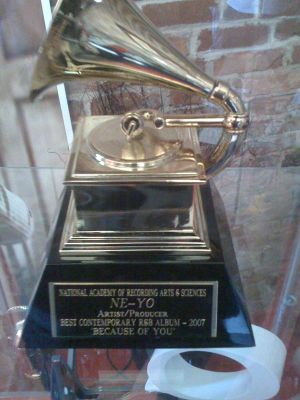 Just a few more shots from Ne-Yo's studio compound in Atlanta where I spent some time this weekend for Jadyn Maria's listening session.

The modern, loft-like space (with racing red floors) is decked out with lots of award statues and platinum records that Ne-Yo has picked up over the year. Forgive me for gushing, but it felt pretty special to be around all that success flashing on the walls. In fact, I was sitting next to one of singer's shiny GRAMMY Awards that he won in 2007.  It may very well be another big GRAMMY night for Ne-Yo on February 8. The singer is up for 6 awards, including "Album Of The Year." More photos of the jump.