Some really neat stuff can happen when brands and music collide. Check out some video footage from a very special gig Microsoft put on this weekend in San Francisco to promote their new KIN phone, showcasing Yeasayer, Asher Roth and N.E.R.D. Featured in the video is N.E.R.D. performing their new single, "Hot 'N Fun," which features Nelly Furtado on the single edit. Watch Yeasayer perform here.

The show was the first in a series of "pop up" shows that are held in small, unusual locations and are announced only hours prior to stage time. It is not a revolutionary new concept, but with a hearty line up of  top notch, diverse performers, it sure is not a show to miss. Microsoft has its finger steady on the pulse of what's happening to show they are in tune with music lovers to promote this fancy new phone. And it has a cool, trippy beat to it too. Tres chic.

A Tour of Kanye West's Home 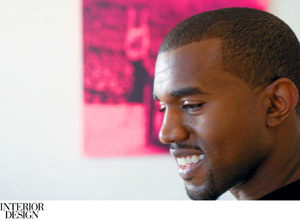 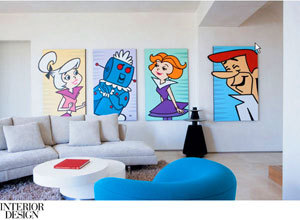 Who knew that the bold and brash Kanye West is really such a minimalist and restrained kid at heart?

Check out an image slide show with photos of the rapper's colorful Los Angeles crib that is featured in the current issue of Interior Design magazine.

West's love affair with modern art should come as no surprise. He graduated from the American Academy of Art in Chicago with a degree in fine art. He started his collection of (pop) art after he commissioned a canvas by Ernie Barnes. His successful recording career has given him the opportunity to deck out his home with lots of additional art pieces and design elements since then.

Designer Don Stewart explains that West wanted his home to look like a cross between a museum and a Louis Vuitton boutique. "Kanye started to realize how into design he is," Stewart tells Interior Design. "Staying at the Bulgari in Milan and the Grand Hyatt in Tokyo on tour, he'd come back full of ideas, in touch with his inner minimalist."

Kanye's pad is filled with colorful pop art pieces in a creamy colored interior, including Jetsons portraits, stuffed animals by Fernando and Humberto, Murakami paintings, a Memmoli crystal chandelier and a Russell Young Marilyn silk screen. Ernie Barnes' dramatic painting appears to be only piece in West's home that is reminiscent of his egomaniacal public image.

Make sure to also to watch West's artful video for his new single "Good Life" that is another good example of the his fascination with lines, movement and color.

Off Topic: Tim Gunn About Fashion 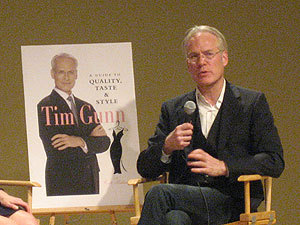 Project Runway's Tim Gunn made an appearance on Wednesday at the Santa Monica Public Library to promote his new book "A Guide To Quality, Taste & Style." Together with co-author Kate Moloney he spoke about the book and answered some questions from the audience. I had the pleasure of meeting Tim briefly before the event. He told me about his upcoming new BRAVO reality show that will be like Queer Eye meeting Project Runway.

Gunn also made some comments about the upcoming fourth season of Project Runway that has "so much talent in it that it could easily fill up three seasons."

Gunn, who was the Associate Dean at Parsons School of Design and is now the Chief Creative Officer at Liz Claiborne, made a few interesting statements about fashion that reminded me of the similarities between fashion and music.

"There are not enough irresistble products out there."
"There is too much to buy and too little to chose from."
"It is all about having a unique point of view."
"Designers don't have to reinvent the wheel. They need to know fashion history so they can apply it."

(A very Big thank you to Robert for inviting me to the meeting with Tim.)