Behind-the-Scenes with Madonna and Marc Jacobs

Check out a behind-the-scenes video that shows the making of the upcoming Louis Vuitton spring and summer campaign that features Madonna. The pop star was photographed by long-time collaborator Steven Meisel that marked the fashion photographer's debut for Louis Vuitton.

Marc Jacobs, Louis Vuitton's creative chief, explains in the video that he was eager to work with Madonna on this campaign. "I wanted the campaign to be very bold, very sensual and very atmospheric. To carry off all these references and all this sophistication, we needed the ultimate performer and for me, that is Madonna " says Marc Jacobs.

The video also shows candid moment with Madonna who is as fierce as ever. "You're wish is my command. just give me brilliance," she teases Jacobs. "I wanna have my cake and I wanna eat it too."

The result of their collaboration with Meisel is absolutely stunning. Even though the Louis Vuitton brand has lost some of its glow due to the abundance of cheap knock offs on street corners around the world, Madonna helps to restore the brand's prestigious and class with these photos. Absolutely flawless.

(Thanks to @MCHammer for the heads up on Twitter.)

From February 14 to May 17, 2009, the de Young Museum in San Francisco presents Warhol Live, a very cool new exhibit that will explore Andy Warhol's famous pop art as seen through the lens of music.

It is no secret that Warhol was immersed in the world of music and art throughout his career. Not only did he illustrate fifty-one album covers (from Tchaikovsky's Swan Lake to Aretha Franklin, and from Diana Ross to Blondie), but Warhol also used music in his films and filmed concerts. He produced music videos and met with musicians, notably for Interview, the magazine he founded in 1969.

Major Warhol silkscreen paintings, films and sound recordings, album covers, illustrations, and photographs will be exhibited. To create just the right setting for visitors, the producers of Warhol Live will recreate Warhol's glam art loft Silver Factory and play sounds from Studio 54 throughout the exhibit. 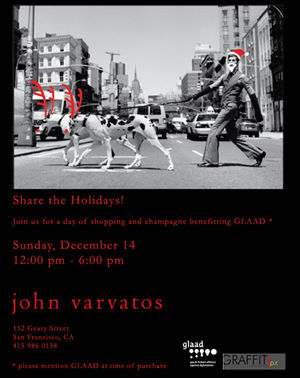 As an active supporter of GLAAD, I just ran into this flyer from GLAAD for a John Varvatos supported holiday party in San Francisco this weekend. The flyer pictures an image from the Varvatos winter ad campaign that features the always amazing Perry Farrell, standing on the Bowery in front of Joey Ramone place. The shot was taken by Danny Clinch who previous also shot Chris Cornell and Ryan Adams for Varvatos. Love the great danes, love the elbow gloves, love the flare pants. Farrell's style drips off the photo. 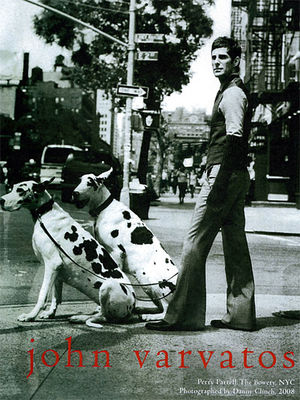 Report from Art Basel in Miami 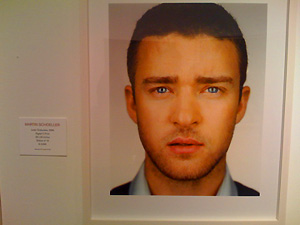 I just got back from Art Basel in Miami this weekend. Had an amazing time. Art Basel is one of the largest arts and culture shows in the United States that draws people from all over the world. I visited the Miami Photography exhibit and the Art Miami show, which was truly phenomenal. I've never seen so much contemporary art in one place. From cutting-edge photography to crafty mixed-media installations and from Chinese CGI multimedia films to colorful sculptures.

I observed such a great play between "formal" art and mainstream pop culture, and music in particular. One of the pieces up for sale was Martin Schoeller's famous close up of Justin Timberlake. This 20" x 24" print is one of ten and sells for $3,000. Mmm. If you'd like to stare in Timberlake's baby blues a few times a day then it may be totally worth it. While on the topic of Justin Timberlake, this work by German painter Christian Schoeler reminded me by Timberlake's role in Alphadog.

A lot of the galleries that exhibited work put out some invaluable pieces to draw attention to their other emerging and more affordable artists. I saw lots of Warhols, a few pieces from Roy Lichtenstein and this very famous painting by Takashi Murakami that has been the inspiration for a line of Louis Vuitton bags. Murakami also produced the cover art for Kanye West's "Graduation."

I also saw this enormous, wall-wide piece that features freak rocker Marilyn Manson.  And doesn't this shot of Shanghai remind you of the cover The Killers' "Hot Fuss"?

It was great to spend a couple of days in Miami where it was warm and breezy. In between strolling around all the art, the homies and I went to have drinks at Surface Magazine's at Gansevoort South rooftop lounge, which is at a beautiful location and definitely worth checking out next time you're in Miami. 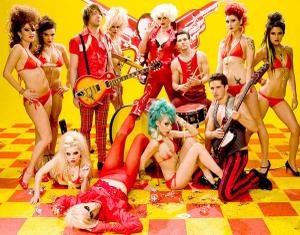 Semi-Precious Weapons, the winners of the MTV Logo ArjanWrites Award, release their debut album "We Love You" today. It is a raw and rambunctious collection of infectious "kunty" punk pop that has fans in a frenzy. The album was produced by long-time Bowie collaborator, Tony Visconti. Not too shabby for a Brooklyn start-up.

"I started my jewelry line as band merchandise. It blew up and took on an amazing life of its own," explains Tranter. "Having a USB necklace that we made ourselves brings it full circle.  Kunty rock n’ roll jewelry that contains actual SPW rock n’ roll content. It’s like I made it up, it’s so fabulous, but it’s real!" (Click here to download "We Love You" on iTunes.) 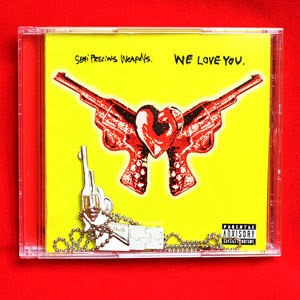