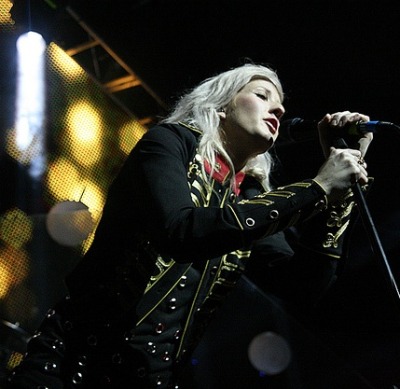 Ellie Goulding's rise to fame is one of the most notable pop success stories of the year. Her critically-acclaimed debut "Lights" is one the best-selling albums of the year in the U.K. that has delivered multiple hit singles.

The big question I had prior to Ellie's show at the iconic Apollo Theatre in London on Friday was how her delicate and finely-tuned brand of folktronica would translate to such a large stage. In fact, the singer's show at the Apollo marked her largest headlining show to date and I was thrilled to be there.

More than 5000 fans packed together to see Goulding perform. And they sure got their money's worth with pop newcomers Sunday Girl (powerful vocals) and the very talented Bright Light Bright Light (infectious pop energy) on the bill as well.

Ellie hit the stage around 9:30 p.m. and kicked off her set with a fiery version of "Under The Sheets" that immediately enchanted the audience (which included her producer pal Starsmith in the back of the room who was eager to singalong with a few tracks).

She continued playing most songs from her debut album plus two covers. She performed an immaculate version of Temper Trap's "Sweet Disposition" and her chart-topping remake of Elton John's "Your Song" that will be featured on a forthcoming re-release of "Lights" that will feature 8 new tracks.

Other highlights included an absolutely stunning and incredibly moving version of "Your Biggest Mistake" (goosebumps throughout) and her ballad "The Writer" that the audience immediately connected to in a massive way, singing and tearing along. A brilliant moment.

Ellie has found a clever way to make her delicate tunes fit a large stage. Her small room set has evolved into a fully-featured stage show with full band, two backing vocalists, a four-piece string orchestra and a flashy video wall to create a powerful new theatrical dimension.

The singer is also growing into a confident stage performer who easily commands the stage, alternately playing the drum set and acoustic guitar while engaging with the cheering audience.

The singer encored with "Starry Eyed," a massive radio hit here in the U.K, while smashing drums splashing up glitter while more confetti dropped down on the audience. This pop fairy spread her magic dust in more than one way that had audience excited and eager for more. (U.S. fans can download Ellie Goulding's EP on iTunes here.)