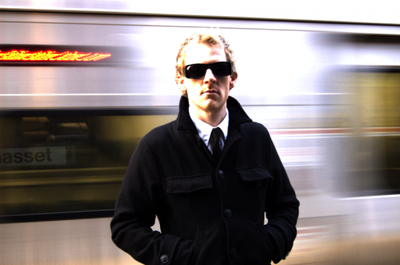 Josh Madden has a knack for seeing, hearing, feeling and creating things that are unique and different. He's one of those few people who are on the bleeding edge of what's new, now, next. One of those people who is a true tastemaker that people look to for new trends, looks and sounds. Not only is he the self-proclaimed  "Baby Ruth of styling," he also is a designer and gifted DJ who combines a whole lot of sweet with plenty of crunchy. Just how I like it.

Josh will be spinning tunes during SUPERFRAICHE on Thursday. He will open the show at 7PM and then spin in between the sets of Dangerous Muse, Reni Lane, Sam Taylor, Brad Walsh and Menya. Good times! Get your tickets today. Make sure to be there early to hear Josh's set. In the meantime, hit him up, on Twitter.

I sent Josh some questions via email and he sent back some very throughful answers that will give you a bit of an insight of what it is that makes him tick.

Arjan: You come from a quite a musical family. Growing up was it always clear to you that you wanted to do something creative as well? I mean you could have chosen to be an accountant and crunch  numbers for the rest of your life (which is totally respectable, but a different route)

Josh: I'll let you in on a little secret... I was an All-State Choris kid, slated to sing the "Class Song" and "National Anthem" at my graduation... that never happened, I failed Mr. Barton's calculus class by 3 points and he wasn't into the idea of letting me slide. I graduated from summer school, started College as an art major, found out I was gonna be handling the bills on my own and graduated with a Bachelor of Science... concentration? Business & Econ specializing in Marketing and Management! Then what did I do? Worked construction and then at The 9:30 Club in D.C. The short answer is I guess... I stand on both sides of the divide. I have a few sides that I'm pretty sure most people haven't and maybe never will see. P.S. I love accountants, I love you PSBusiness Management.