[REVIEW] Jessie & The Toy Boys "Show Me Your Tanlines" EP 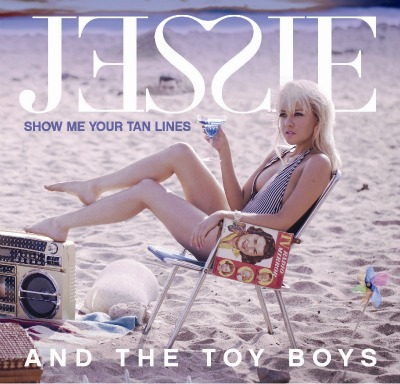 Jessie & The Toys Boys is on a roll. After making her TV debut last week on Conan O'Brien's late show and prepping for her opening slot on Britney Spears' Femme Fatale Tour, Jessie Malakouti released her debut EP "Show Me Your Tanlines" on iTunes this week.

The rising success of the singer has been long in the making and sure didn't happen overnight. After some failed label deals and a songwriting stint with Xenomania in London, the Los Angeles artist is now finally in reach of true mainstream success that she has been working so hard on to achieve.

Pop newcomer Jessie & The Toy Boys is an artist you should know. The Southern California native is impacting the pop scene with her debut single "Push It" that is taken from her forthcoming debut LP, which features production work by people like Tony Kanal (of No Doubt), Jimmy Harry, Nellee Hooper and Dr Rosen Rosen.

I recently chatted with Jessie to get to know her a little better. Her story is fascinating and starts with her move to Los Angeles from Inland Empire, CA with a dream of making music and fame. After singing in different bands, moving to London to write for Xenomania's hit factory and appearing as a dancer in many music videos, she's now on track to break out as a solo artist. Great, insightful chat. Watch, like and share. Thanks, Jessie! (Support new pop and grab "Push It" on iTunes now.)