Janelle Monae and her savvy Wondaland crew are about to unleash the much-anticipated “The ArchAndroid“ on May 18. They are pumping up the anticipation with this mysterious trailer that comes with a surprising twist at the end. If you have a chance, go see Janelle on tour in the next few weeks. Seeing is believing.

This woman never ceases to amaze me. Check out the excellent, much-anticipated video for Janelle Monae's new single, "Tightrope," that shows Monae and her crew sliding across the screen with some spectacular fancy footwork. First "Tightrope" was a song and now it is a dance move too! Love every second of this new video. And in true Monae-fashion, she packages her visuals with a compelling message that captures the empowering essence of the song, "When you get elevated, they love or hate it (. . .) They try to take all your dreams, but you can't allow it." Dance, dance, dance while walking your tightrope. 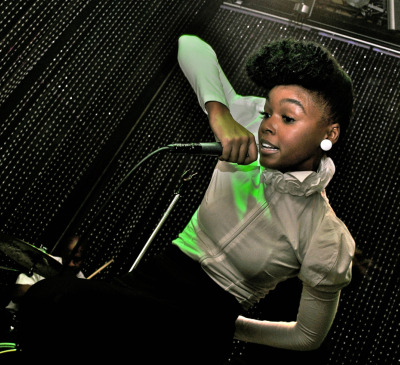 L.A. Weekly's Andrea Whiting saw Janelle Monae strut her stuff a few days ago at West Hollywood's Viper Room and has some very, very nice things to say about one of my favorite singers.

"The girl is brilliant, but I'm not sure anyone knows what to do with her quite yet: she's not as dramatic as Lady Gaga, not as easy to categorize as Beyonce's little sister trying to be a hipster, and probably more talented than both."

Sweetness! Seeing is believe, I've been saying that for years. Monae mania is about to hit when the video for her new single "Tightrope" will hit airwaves tomorrow. See some behind-the-scenes below.

This woman can do no wrong. She is simply stunning, delivering nothing but perfection - musically, artistically and visually. Yes, I know. I'm boasting. But once in a while it is just so deserved and legit. Watch Janelle perform her new single "Tightrope" on BET's Rip The Runway. The singer also appears in the April issue of Vogue with some fantastic photography and an interview. See photos from the issue here. 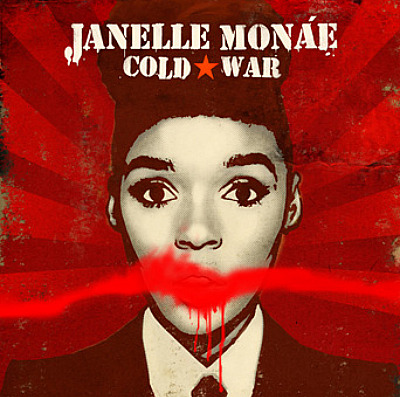 Ever since I first saw Janelle Monae perform two years at the Dafur Now College Tour at Emory University in Atlanta, I was a blown away by the energy and passion of her performance. My jaw dropped to floor when Monae strutted up and down the small stage in front of a handful of people. She ignited so much positive energy - excuding the spirit of Elvis, Michael Jackson and Judy Garland rolled into one.

Janelle Monae skillfully blends genres, and infuses her music and performance with a message of hope and empowerment. Not growing up in the best of circumstances, she understands like no other the struggle young people have to go through to make the best of their lives. Over the past year, she has particularly reached out to young women and the GLBT community to support their fight for equal treatment and acceptance.

Monae's upcoming big label debut "The ArchAndroid" is the result of a long road of hard work and persistence. After growing up in Kansas, she moved to New York City to go to music school and work on Broadway. But after being rejected for reasons that had nothing to do with her talent, she came to Atlanta to pursue a career in music.

Outkast's Big Boi took her under his wing and helped produce her first debut LP that got the interest from Sean Combs. The mogul signed Monae to his Bad Boy label and gave her space and time to fully develop her musical portfolio. In an industry that is all about quick hits and a quick buck, it is rare that a young artist gets this much time to experiment and fully bloom. During her ramp up, she was nominated for a GRAMMY Award last year, and I nominated her for a MTV Logo Award.

On Friday, Monae released two songs to fans in anticipation of her full-length effort. Both "Tight Rope" and "Cold War" are incredibly catchy tunes that show off the singer's knack for mishing and mashing genres in a completely unique way.

The uplifting "Cold War" packs a powerful message that not only demonstrate her rich musical inspiration but also her calling to incite a movement. "While listening to "Cold War," you may feel obligated or inclined to find your purpose," Monae writes on her web site. "You may want to form a huge tribe to help fight against the many things that work against you being your true self, just the way you were uniquely designed. You may even begin to dance while thinking, with a furrowed brow. You may begin to feel an increased responsibility to helping others free themselves from depravity."