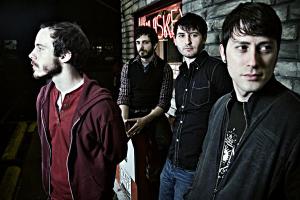 Meet Paper Rival, a new indie pop band from Nashville that is stirring up the scene with their self-titled digital EP. They are currently signed to Photo Finish Records, which is a new label formed by Matt Galle, booking agent for My Chemical Romance and Taking Back Sunday. The Tennessee-based band is currently in the studio putting the finishing touches on their full length that will come out in February.

Paper Rival are vocalist Jake Rolleston, guitarists Patrick Damphier and Brent Coleman and bassist Cody McCall who got together after previously playing in amicable local bands. "We were in the studio within two weeks of deciding to become a band," explains Damphier in a press release. "We took two songs from Jake's band, two songs from my band, and co-wrote one song to get started." Their EP was recorded in three Nashville studios and produced by Damphier.

My favorite Paper Rival tune is "You're Right." Introduced by crashing guitars, the rocky intro leads up to a melodic, near ethereal chorus that is downright gorgeous. And Rolleston even shows off a little falsetto. Pure hotness.