Beating the Summer Heat with an Ice Cream Compilation iMix 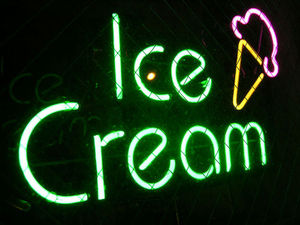 Beat the summer heat with some fresh and cooling tunes.

Almost the entire continental Unites States is currently covered in a sticky blanket of heat and humidity that is making a lot of people very uncomfortable. But no worries. I've got just the chill you need to get that thermostat under control.

I put together an iMix compilation of ice cream inspired tunes that will help you to cool down a little during this summer's heatwave. Whether you like it organic, frozen, light, creamy or prefer gelato, I included a sweet flavor for everyone to enjoy. (I selected songs that are availabe on iTunes. Feel free to share your heat-beating suggestions in the Comments section. Click here to download the entire iMix compilation on iTunes.)

Update: Some of you suggested I also include two tracks not available on iTunes: Muscles "Ice Cream" and Soft Tigers "Mr. Ice Cream." (Thanks Travis, Paul and Ben)

Taxi Ride "Ice Cream"
A slick tune by Australian boyband Taxiride from 1999. This has guilty pleasure written all over it. It is called "Ice Cream" for a reason.

KLT "Ice Cream"
Song by Kansas City rock outfit KLT that was inspired by a superhero spawned in the mind of Kenny Carter, the group's singer.

Urchin "Ice Cream Van"
Splendid chill-out track with a cinematographic, trip hop quality to it. Turn it up, close your eyes and get carried away.

Pharrell "The Ice Cream Man"
When I think of Pharrell, I think of fly beats, soulful hooks and a spirited delivery. This track is all that.  And of course, I'm loving Pharrell more than ever now that he signed hotter than hot Chester French to his Star Trak label.

Barbara Cook "Ice Cream"
Vintage Broadway tune from the 1963 cast recording of She Loves Me. 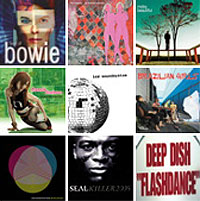 BRAVO's Project Runway is by far one of the most enticing reality shows I've seen on television. Killer fashion, catty designers, a queeny Michael Kors and a whole lotta drama. What more can we possibly want? Fashion and music are two forms of art that are unmistakably linked. I put together an eclectic compilation of tunes that equals the spunk, attitude and occasional growl on the show. Click here to download the Project Runway iMix soundtrack on iTunes. A brief description of each of the tracks:

Seal "Killer" (Peter Rauhofer 2005 Mix)
Host Heidi Klum made reality television history with the phrase "You're either in or you're out."  The German model will be marrying singer Seal later this year. Peter Rauhofer's 2005 remix of "Killer" turns this Seal classic into a great runway stomper.

David Bowie "Fashion"
David Bowie is arguably rock music's greatest chameleon. In this classic, he sings about the fashion 'goon squad" that comes to the rescue. Sounds like Austin Scarlett to me.

Moby "Beautiful"
This is an ode to all the wonderful models on the show. Morgan especially. She created some delicious television. Morganza!

Brazilian Girls "Don't Stop"
A terrific anthem for both the winners and losers in this game.

Sarah Hudson "Girl On The Verge"
Pop star Sarah Hudson (cousin to actress Kate) was featured in the show on which Vanessa was voted off. I think this song is really about Wendy.

The Bravey "An Honest Mistake"
Consider this song by indie outfit the Bravery Wendy's formal apology to the group. All her drama and maneuvering was just an honest mistake. Yeah, right.

Deep Dish  "Flashdance"
The infectious guitar riff of Morel's John Allen and Anousheh's distinct vocals will go for miles on the runway.

The Postal Service "We Will Become Silhouettes"
This track is the musical equivalent to the outfits the contestants designed for the US Postal Service on episode 8.  It is an excellent tune to cool down with after the show and remember that most of the talented individuals will become reality television "silhouettes" after their 15 minutes are up.

Also download "Breath On Me" (The Project Runway Farewell Theme) that was composed by Harold Barefoot Sanders III.

Don't forget to check out Chris Piece who sings "Are You Beautiful" in the Project Runway/Banana Republic commercial.