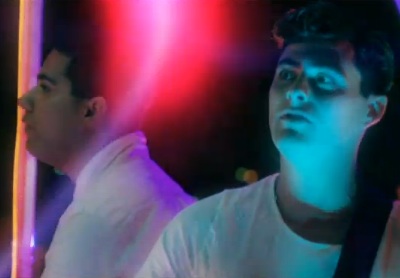 Filmed under a glowing Aussie sky and lit up by futuristic neon beams, Gypsy & The Cat finally bring us the official video for their new single "Jona Vark." It's a simple cinematographic concept that fits the lush and synthy pop vibe of the song.

For those who missed my alert about Gypsy & The Cat back in October, let me just quickly re-cap things for you. Gypsy & The Cat is the teaming of Xavier Bacash and Lionel Towers who only began making music together in a garage in Melbourne a little over a year ago. Aussie indie radio station Triple J got a hold of one of their early demo tracks, and put the song in full rotation.

London indie label Young & Lost was quick to secure the release of the group’s debut single "Time To Wander" in the U.K. That led to interest from the big and mighty Sony Corporation who promptly signed the group to a coveted worldwide deal.

Gypsy and The Cat serves up a warming blend of melodic pop that is set in grand electronic soundscapes that is influenced by acts ranging from Fleetwood Mac and Jeff Buckley to the innovative electronic sounds of Daft Punk and Justice. Their single "Jona Vark" is a good example of that and it was that song that immediately struck me when I first saw them play in Perth, Australia. Watch the video for "Jona Vark" plus my video interview with the group after the break.

Australian pop duo Gyspy & The Cat are one of the most exciting new acts to hit the scene this year. I saw Xavier Bacash and Lionel Towers perform at the One Movement Festival in Perth, Australia this past October, and was I immediately grabbed by their heartfelt blend of pop.

Gypsy & The Cat's music is dominated by pop-savvy melodies with massive, uplifting choruses and sparkly production stylings that balance the darker and melancholic storytelling. It is the distinct contrast between melodies and lyrics that make Gyspy & The Cat's music truly compelling.

I met up with Xavier and Lionel via video in London last week to get to know them a little better. Candid and laid-back, we chatted late in the evening about how they started collaborating, their songwriting process and the very personal emotions that are at the core of their phenomenal debut album "Gilgamesh."

"Gilgamesh" was released on Sony/RCA in Australia this week and the group is releasing "The Piper's Song" as their single in the U.K. Xavier and Lionel also chat about their release plans for the U.S. that are currently in the works. (Thanks for staying up so late guys. Good to meet you!)

Listen to Gyspy & The Cat "The Piper's Song" (Aeroplane Remix) 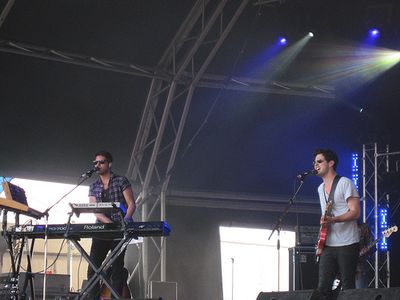 Australian duo Gyspy & The Cat are one of the most exciting new acts to keep your eye on in the next few months. I alerted you about them last month after I saw them perform at the One Movement Festival in Perth, Australia and was blown away by their mesmerizing, melodic brand of pop.

The duo of Xavier Bacash and Lionel Towers successfully fuses warming synths with uplifting, hooky melodies and sun-soaked harmonies that can lift you up and move you. Powerful stuff. This is a band to believe in and I expect them to accomplish big things over the next 12 months.

Listen to a fantastic remix of their new single "The Piper's Song" that was produced by Belgian dance producer Aeroplane who adds a crunchy disco stomp (and yes, a cow bell) to the original track.

Currently, Gyspy and The Cat is taking on the U.K. to promote "The Piper's Song" and their forthcoming debut album that is slated for release in 2011 on Sony/RCA. No U.S. release dates have been set, but keep your eye on this blog for some exciting updates to come very soon.