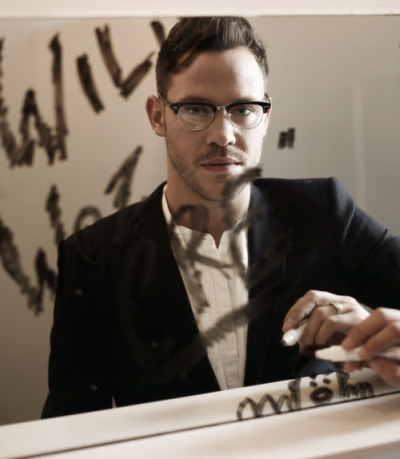 Groove Armada's new album "Black Light" was released on the cooler than cool Om Records in the U.S. this week. The duo of Andy Cato and Chris Findlay never cease to surprise fans and once again they have come up with some excellent new pop electronica tunes that feature some surprising collaborations.

Talented London electro-pop singer Saintsaviour (aka  Becky Jones) makes several appearances on the album and also co-wrote some of the songs on the CD, including "I Won't Kneel. Also featured on this record are Bryan Ferry,  Empire of the Sun's Nick Littlemore and British pop pop singer Will Young (who is one of my fellow Out 100 honorees I'm proud to say. Will Young's photo above was shot by Jason Bell for the Out 100 portfolio).

I must admit that I totally dig the tracks that feature Santsaviour, but I love, love, love "History" featuring Will Young. It has such a very cool '80s throwback vibe. It is is Bronski Beat's "Smalltown Boy" all over again. This is a keeper. It only gets better. (Support new pop and download "Black Light" right here.)