Everybody's On! Roving Reporting at The GRAMMYs with HP 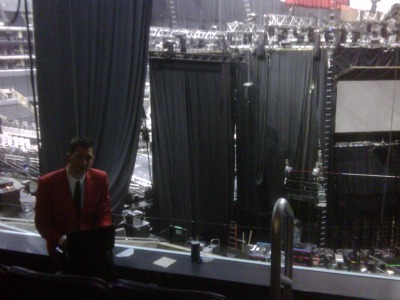 (Backstage at the GRAMMYs on Sunday with the HP dm1z.)

Titled "Everybody's On," HP launched a new global advertising campaign last week that emphasizes how passion inspires technology, and how technology fuels passion. Whatever it is that makes your heart race a little faster, whether that is gaming, music, fashion or design, HP brings you the tools to help you pursue your passion in exciting new ways. I'm also included in the "Everybody's On" campaign, sharing my passion for fresh new pop music. (Click here to see the "Everybody's On" hub.)

HP provided me with some cutting-edge new hardware to help me cover the GRAMMYs. As a roving reporter I have very specific requirements about the technology that I use to make sure I can roam around easily for a long period of time interacting with people on Facebook and Twitter, and writing blogs. The technology needs to be easy to use, light-weight and have plenty of battery life.

During my 8-hour live coverage of The GRAMMYs on Sunday and throughout GRAMMY Week, I used the brand-new HP dm1z laptop that was ideal for my roving reporting assignment. In fact, the cryptic name of the laptop really doesn't quite express what this little powerhouse delivers. It should be titled the HP Breeze or HP Feather to properly describe its features.The HP dm1z laptop is small, light-weight and yet very stirdy.

Continue reading "Everybody's On! Roving Reporting at The GRAMMYs with HP" »

Report from The GRAMMY Awards: Celebrating The Biggest Night In Music 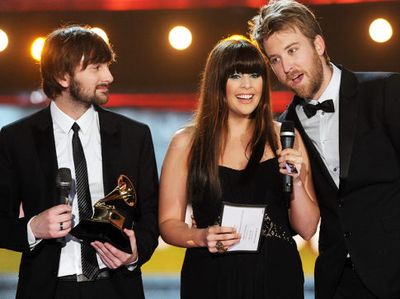 My head is still buzzing from last night's 53rd GRAMMY Awards, an 8-hour long musical tour de force with fantastic winners, great music and some very memorable performances. I was GRAMMY's roving social media reporter covering dance and pop, tweeting from the pre-tel ceremony and backstage at the Staples Center for the big televised show.

This was my third year covering the awards for NARAS, and believe me, this never gets old. It is a magical night that celebrates some of the best and greatest in music. To be so intimately involved is a music fan's dream come true.

During the pre-telecast ceremony on Sunday afternoon most of GRAMMY's 108 categories were featured, including Dance, Pop and Electronica. The award for Best Dance Recording went to Rihanna's "Only Girl (In The World)," a stomping dancefloor groove written and produced by Stargate & Sandy Vee. A well-deserved win in a category that was chockful of talent, including ArjanWrites.com fave Robyn.

After receiving a double platinum plaque for selling 2 million copies of "In for The Kill" on Friday, La Roux took home the GRAMMY for Best Electronic Album - an enormous achievement for the British duo who were able to take crisp, Euro-styled electro-pop to the top of the mainstream U.S. charts.

Continue reading "Report from The GRAMMY Awards: Celebrating The Biggest Night In Music" » 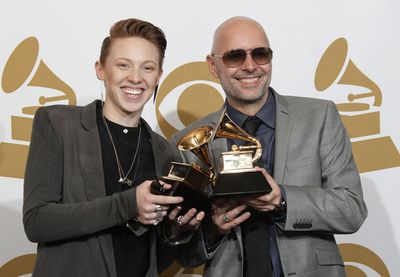 Look at Elly's smile! That picture tells a thousand words. I'm so excited for the British pop duo who took the GRAMMY for Best Electronic Album yesterday during the pre-televised ceremony for "In For The Kill." On Friday, I spoke with the duo for Cherrytree TV just after they had received a plaque for selling 2 million copies of that album. Incredibly impressive and nothing less than a massive victory for electro-pop in the States. (Look for that video interview very soon.)

I was back on CNN last night to preview the 53rd GRAMMY Awards and to give viewers a taste of some of the performances to look forward to tonight. Stay tuned to my Twitter feed for real-time updates throughout the day. I will be roaming around backstage at the Staples Center to give you all the scoop.

Breaking Down The GRAMMYs 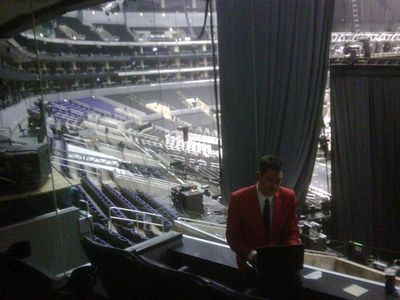 That's a quick snap of me sitting backstage at the Staples Center tweeting, blogging and doing a few radio interviews via Skype a few minutes after the end of last night's GRAMMY Awards. Stage crews started breaking down the stage right after the show finished. I will have a wrap up of the year's biggest night in music in a bit. Thank you all for tuning in to my Twitter feed last night for all the updates. Loved all the feedback. (Quick shout to HP for keeping me connected flawlessly.)