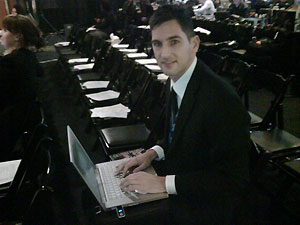 Head over to Twitter for Arjan's latest updates from the GRAMMYs.

I just came back from the pre-telecast at the L.A. Convention Center for three hours of coverage of 100 Award categories. I rushed back to the GRAMMY command center in the FOX skybox at the Staples Center and I just went up to the media center where reporters are getting ready to interview winners and presenters during the GRAMMY telecast.

Twitter will enable throughout the night to quickly send you updates and get your replies and questions. Let's make it a really fun, collaborative Twitter event. I'd love your input and questions while I go. 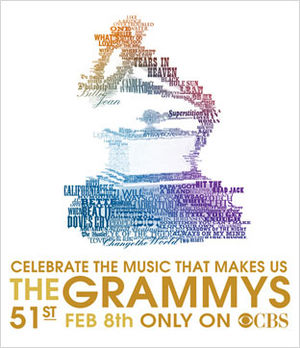 I'm getting ready for the big day. Making sure that all the technology needed is locked and loaded. I'm bringing a digital voice recorder (just in case I get an interview), my new Blackberry (to tweet my observations) and some extra battery packs to keep things going.

Lil Wayne might walk away with a few GRAMMY statues at the end of tomorrow's show. The New Orleans rapper received an impressive 8 GRAMMY nominations, including Album Of The Year.

The lead track of that album is "Lollipop," a pulsating tune that kept hip hop fans rocking throughout much of 2008.

Miami producer Jim Jonsin spoke at a BMI panel this afternoon at the Sunset Strip's Key Club about that track and how it came about. He produced the hook in less than 7 minutes after he was asked to write another Danity Kane's "Showstopper."

Yesterday afternoon, I went up to the media room at the Staples Center where artists and other celebs where doing media interview with radio stations. While walking around I caught GRAMMY nominees Duffy and Jason Mraz when they walked from one interview appointment to the next. The result are some candid, quick moments with each of them. (Sidenote: Duffy is such a doll, and Mraz is just so cool.) Yesterday marked the second, much-anticipated performance of Jennifer Hudson after her touching return to the spotlight at last week's Superbowl. Hudson performed at the annual MusiCares Gala, a Recording Academy benefit that supports musician who struggle with illness, poverty and addiction. The Gala honored singer/songwriter Neil Diamond for his 50+ year career. Very impressive.

I dressed up in black-tie and went on my way, meeting and greeting my new friends at The Recording Academy. We roamed around the benefit auction before the Gala commenced. Several fun items were up for auction, including signed Rolling Stones covers by Bono, Paul Simon and The Jonas Brothers, signed guitars, paintings of artists and a classic Thunberbird that was donated by Neil Diamond and purchased by the President of the Recording Academy, Neil Portnow.

Several artists were invited to perform songs from Diamond's canon of songs for an audience of 2000 people, including Coldplay, The Jonas Brothers, Faith Hill, Foo Fighters and others. I was seated in the back and felt incredibly honored to be part of this exclusive, once-in-a-lifetime event. I mean how often will I get to see Coldplay do an acoustic version of Diamond's "I'm A Believer" (which he wrote for The Monkeys).

But everybody in the audience was holding their breath for Hudson. She was the second performer after the Jonas Brothers. She looked magnificent! Confident and mature. She covered Diamond's 1969 "Holly Holy" and worked it out. She nailed that performance! It came from such a soulful place and she had the crowd in standing ovation. It's so good to have her back. I'm confident that Hudson will be around making records and performing for a very, very long-time. She might well be the ultimate American Idol.

Diamond closed the Gala with a performance of some of his most-well known tracks including "Love On The Rocks," "America," "You Don't Bring Me Flowers" (with Faith Hill) and "Sweet Caroline" that brought all of the performers back on stage for an exuberant finale that had the crowd dancing.