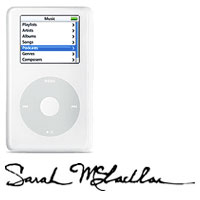 At running the risk of posting too much about Sarah McLachlan's new album in one week, I present an exclusive Sarah McLachlan iPod contest. To celebrate the release of "Bloom,"  SonyBMG and Arjan Writes are giving away a Sarah-autograph-etched color iPod to one lucky winner. 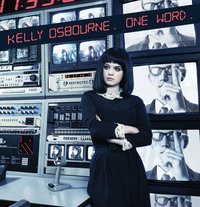 The timing could not be any worse: Kelly Osbourne checked back into rehab on the day of the release of her second album "Sleeping In The Nothing" on Tuesday.  Apparently, she slipped back into some of her old habits and needed time away to deal with her addiction. To keep things positive and to celebrate the release of this new CD, I'm giving away a very exclusive vinyl 12" record with remixes of her single "One Word." To have a chance to win, email me and I will randomly pick a winner from all the entries on July 1. Congratulations to Arjanwrites reader Craig Edwards from Los Angeles, CA for winning the exclusive Limited Edition version of Sasha's "Involver." The CD will go out in the mail today.

This week I'm giving away a very special Cherie gift box with Cherie's self-titled debut album, a promotional DVD EPK and a unique signed photograph of the French pop singer. This package is provided to Arjanwrites by Lava Records.

Currently on tour with Clay Aiken, Cherie's success has been long in the making with vocal pipes that are nearly as large as Celine’s. A steady buzz mounted after Cherie was featured in AOL Music’s Breaker program that previously included stars like Avril Lavigne and Josh Groban.

The remixes of her debut single "I'm Ready" have been tearing up dancefloors around the country this summer. Her self-titled album is a mixture of uptempo pop and radio-friendly balladry (iTunes link), which is not often original but a safe guilty pleasure.