Video Premiere: Fischerspooner "We Are Electric"

This video is pure awesomeness. Art meets electro meets Blade Runner meets neon meets dance beat meets you.  You must check out this new Fischerspooner video for "We Are Electric" that is taken from their excellent new CD, "Entertainment." And that's exactly what this video is. Sit back, relax and enjoy the ride.

"The hat [featured in the video] is based on a Kabuki dance called Wisteria Maiden," singer Casey Spooner explains.

The hat is not only a central element in the "We Are Electric" video, it also plays a big role in Fischerspooner's stage show. "I do a dance at the beginning of the show about outer space," Spooner explains, "Now the hat signifies even more things: the moon, isolation, ambition, show biz and space travel. I like that it combines several strange and conflicting references that all add up.  It is real neon that Lite Brite Neon installed with a battery pack so I can wear it on stage."

Fischerspooner's new record "Entertainment is very, very good. It's been totally worth the wait. Check out some candid rehearsal footage of the group's tour rehearsal. Their "Between Worlds" tour kicks off in New York next week. 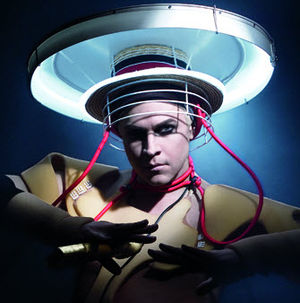 Wow. They truly outdid themselves with this one. And it's all about the hat.

Casey Spooner and Warren Fischer invited an army of creative and fashion pros to help them create a the cover for their forthcoming new album, titled "Entertainment." Their vision was to weave elements of Vaudeville, Kabuki and 60s-era U.S. Space Program to reflect their vision for this new LP.

"This hat is based on a Kabuki dance called Wisteria Maiden," Spooner explains. "Kate Valk from The Wooster Group brought a video of the dance into rehearsal for inspiration. In the traditional dance they use a hat that becomes lots of things. It is a prop that transforms into an umbrella, a shield and a palette. I made a prototype that was my straw boater with a hat box lid stuck on top and held on with a bungee cord. Nasir took that prototype and transformed it into what you see now."

"I do a dance at the beginning of the show about outer space. Now the hat signifies even more things: the moon, isolation, ambition, show biz and space travel. I like that it combines several strange and conflicting references that all add up.  It is real neon that Lite Brite Neon installed with a battery pack so I can wear it on stage.  And it matches our new logo."

"Entertainment" will be released on May 5.

Fischerspooner to Release New Album in May 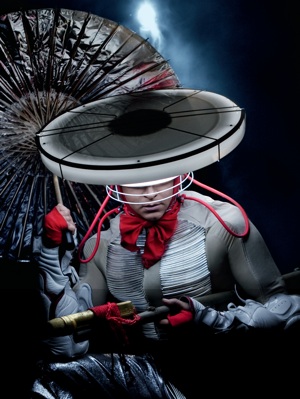 Great news! Fischerspooner will be releasing their new (third) album, titled "Entertainment,"  on their own FS Studios label in May.

After experimenting with more chart-oriented electro pop with the help of producers like Linda Perry for "Odyssey," the group returns to their humble electro beginnings with this new disc. Warren Fischer and Casey Spooner recorded "Entertainment" over a period of two years with producer Jeff Saltzman (The Killers, Sounds), Ann Magnuson (Bongwater), Gabriel Olegavich (Lady Sovereign, Spektrum) and Steven Stein (Double Dee & Steinski).

The group launched a very cool (interim) web site featuring scenes from their rehearsals to build up anticipation for the new disc. 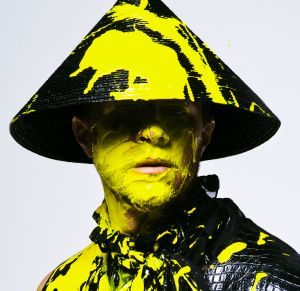 Fischerspooner's Casey Spooner met up with Miss Toats of IHeartComix.com to discuss the duo's new projects, plans for the future ("I want to do stand up comedy one day") and their new label Kitsune Maison.

Spooner also talks about his past obsession with pop culture and and how he has grown tired of it. "I dream of STARS. Exciting and unusual people who live in ways we can't imagine," he concedes. "I suppose it is all about imagining a personal utopia. I am less and less interested with 'celebrity' I think I may have burned out on this idea. Something has happened. Britney is mentally ill, Madonna is 60 and Michael Jackson is homeless. I am into people like King Ludwig of Bavaria, Wagner, Willie Nelson, Zeigfeld, Lon Chaney, Tod Browning, Hitchcock, Jeff Koons and Mark Twain."

At the end interview, you can pick up a free MP3 of the D.I.M remix of Fischerspooner new single "Danse En France," a hot and happening slice of electro house. (Click here to download the original edit of "Danse En France" on Beartport.)