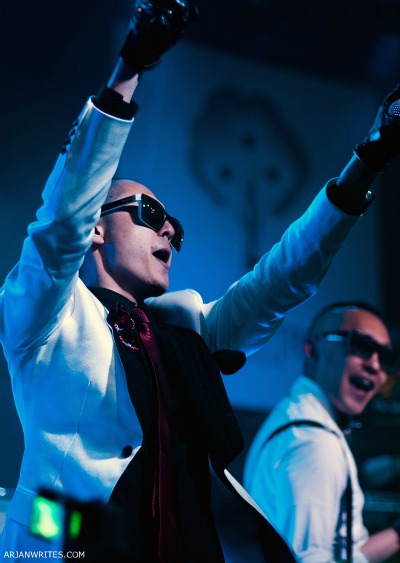 Far East Movement's adrenaline-fueled show was a relentless, unstoppable and tireless tour de force of their L.A. bred club jams that had the crowd dizzy on their feet from beginning to end.

The Los Angeles outfit of Kev Nish, Prohgress, J Spliff and DJ Virman performed a selection of hits from their debut LP "Free Wired," including their new single "So What," a tribute to the Beastie Boys, "If I Was You (OMG)" and "Go Ape."

Staying true to Cherrytree Records' collaborative spirit, the group invited a couple of their label mates to come on stage with them. Natalia Kills joined Far East Movement to perform their global breakthrough smash "Like A G6" and a pitch-perfect Frankmusik jumped on the keys and mic to perform "Rocketeer," a song written by Bruno Mars and originally performed with Ryan Tedder of One Republic. 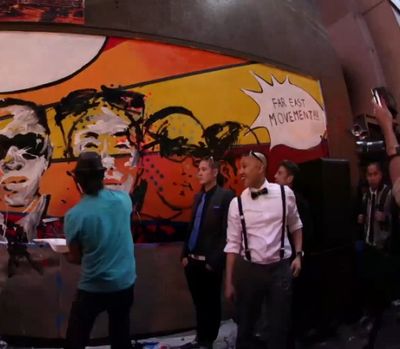 Before jetting to Europe to play at Cherrytree London and Capitol FM's Summertime Ball, Far East Movement teamed up with painter Robert Vargas last Thursday eve at LA's artwalk to create a piece of art that can be best described as a "live mural music mash up" piece. Vargas painted a Far East Movement mural while the group jammed out a few of their hits, including their Beastie Boys' tribute "So What."

After Far East Movement appeared together with Vargas to start work on the mural, a large crowd of fans swelled quickly on the street, which caused the LAPD to come in with sirens blaring and shut down part of 5th Street. Police officers helped control the chaos and let Far East Movement and Vargas continue their work while giving onlookers space to see the performance (video).

The live mural music mash up is such a cool and fantastic idea that fits both Far East Movement and Vargas perfectly. Both grew up in downtown Los Angeles and have been inspired by the area's gritty yet colorful and open-minded surroundings.

In fact, like I've written before, Far East Movement's all-inclusive, free wired mashing of styles to create an edgy, yet mainstream-friendly aesthetic was inspired by their downtown roots and is now reflected in their music, look and artistic attitude. Watch a video of Far East Movement and Vargas' mural after the break.

Review: Far East Movement Releases Video for "So What" 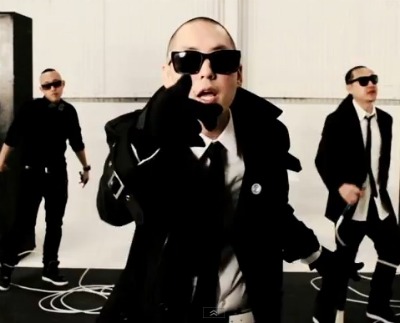 While on the topic of Far East Movement, make sure to check out their brand-new video for "So What." The video comes hot on the heels of their impressive performance at the Billboard Music Awards earlier this month where they performed together with Ryan Tedder of One Republic and Snoop Dogg.

The video for "So What" was directed by long-time FM collaborator Guillame Doubet who earlier also directed videos for "OMG" and "2 Is Better," Far East Movement's collaboration with Natalia Kills.

Styled in black and white with a dose of sticky hot pink, the sleek and sexy video neatly introduces each of the group's members who rotate in the camera spotlights. It's a cool way to underline that this is a group of creative individuals who blend their unique perspectives to act as one as opposed to being a quickly whipped up soundboard concoction with little personality.

Point in case is that "So What" is a tribute to The Beastie Boys, a group that has had a massive influence on Fast East Movement. "So What" is a subtle nod to Beastie Boys' 1992 "So What'cha Want" and at one point Far East Movement even performed as the Far Eastie Boys Crew in their earlier days to show off their respect for the legendary rap trio. Watch the video after the break.

Far East Movement Releases "If I Was You (OMG)" Remix EP 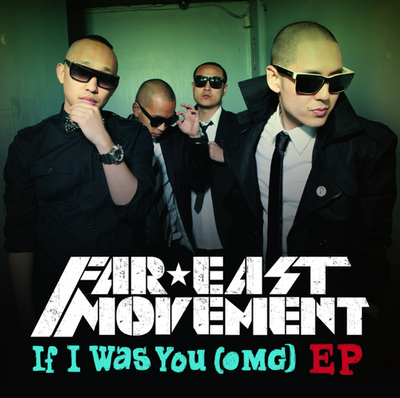 L.A.'s Far East Movement served up a fantastic live performance last night during the Billboard Awards in Las Vegas, performing a medley of "Rocketeer" (with One Republic's Ryan Tedder), "Like A G6" (for a quick second) and their new single "If I Was You (OMG)" together with none other than Snoop Dogg (watch it here).

It was Far East Movement's biggest television appearance to date and the group rose to the occasion impressing millions of viewers with their energetic and "free wired" blend of hippopdanceelectro that is flying up the charts everywhere. Great look, smash show.

Make sure to grab Far East Movement's fresh new EP on iTunes that not only includes a special dance remix of "If I Was You (OMG)," but also a reflip of "So What" in the Cherrytree House and the Fantastadon remix of "Don't Look Now" featuring Keri Hilson. (Download)

Exclusive Video: Watch Frankmusik "Do It In The AM" Video Commentary

Congratulations Frankmusik! The video for his new single "Do It In The AM" has received more than 1 million views since its release last week. It's a terrific accomplishment for the pop singer and a reflection of all of his hard work in the last eighteen months.

Frankmusik moved to Los Angeles from London in late 2009 to rejuvenate his creative mojo and write new music. Since then, inspired by California's sunny lifestyle, new friends and a new label partnership, the singer has been cranking out massive amounts of new material for his sophomore album. And if that wasn't enough, he has been writing and producing for other artists as well, including electro-pop heroes Erasure and newcomer Colette Carr.

"Do It In The AM" is very much a reflection of Frank's new-found inspirations and his desire to write great, uncompromising and high calibre pop music. Simple as that. Featured on the track are his friends and Cherrytree label mates Far East Movement who are also prominently featured in the video. Frankmusik and FM have grown close after touring together across the world for the past 6 months.

Frank and I sat down last week in the Cherrytree House to talk about the video for "Do It In The AM" the day prior to the video's debut. Frank also provided some really cool scene-by-scene commentary that will give you more insight into the vision for the video and its production. A big thank you to Frank and the Cherrytree Records team for coordinating and filming our chat.

While on the topic of Cherrytree Records, make sure to tune in to CherrytreeRecords.com to catch previous and upcoming new episodes of Pop Chop Minute, plus an extended Pop Chop interview that is all kinds of Gleelicious.  (Support new pop and download "Do It In The AM" on iTunes.)