While much of the U.S. is dealing with record heat advisories and the burning sun, Dragonette soaks up the summer heat with their fantastic new "Volcano" that was released on iTunes today. Invigorating, refreshing and totally fun, "Volcano" will hit you like a cool shower and provide some much-needed chill from the summer heat. (Support new pop and download "Volcano" on iTunes now. Dragonette is headlining my Superfraiche Pop Night that is debuting in Atlanta on August 16. More info about there here.)

Yes, yes, yes! Kaskade teamed with Martina of Dragonette to whip up the flaming "Fire In Your New Shoes" and there now is an equally hot video to go along with it that just premiered this morning. Oven fresh! Don't forget to like if you love. Click here to download the MP3 of the song on Amazon.com. (Don't forget: Dragonette is performing my Superfraiche Atlanta show on August 16. Get your tickets now.)

The Dragonette goodness just keeps on coming this week!

The group not only announced that they will be headlining my Superfraiche Pop Night in Atlanta, they are also featured on iTunes with the Single of the Week, plus the group's brand-new collaboration with Martin Solveig was unveiled this week. After previously teaming on "Boys & Girls, Dragonette's Martina Sorbara reunites with the French DJ/producer to contribute her vocals to his new single "Hello," a chunky dance-pop number that is just perfect for summer.

The song comes with a totally fun video that features Bob Sinclar, tennis players Nocak Djokovic and Gael Monfils and was filmed live in front of a real audience at Roland Garros during the French Open. It's a must-watch. After the jump.

There's never, never, never such a thing as too much Dragonette. This is one of my favorite pop bands around and their most recent album, "Fixin' To Thrill," was among my favorite records of 2009.

As a pop lover, I must admit that I'm frustrated that this band is not getting the attention it deserves. Dragonette has all the makings of a chart-topping band with its ferociously infectious pop melodies and slick production work. Plus, Dragonette is a band and not a studio concoction. They flawlessly translate their studio sound to the stage and add a whole lot of energy.

They have been touring with Little Boots for the past few weeks, and I've heard people rave about their show. Due to unforeseen circumstances they had to cancel part of the tour, but they are trying to rebook all their dates - so keep your fingers crossed. In the meantime, enjoy the brand-new video for "Easy." The video version of "Easy" is a slightly altered version of the album track, but still oh-so very good. What do you think of the new Dragonette video? (Support new pop and download Dragonette's "Fixin To Thrill" now.) 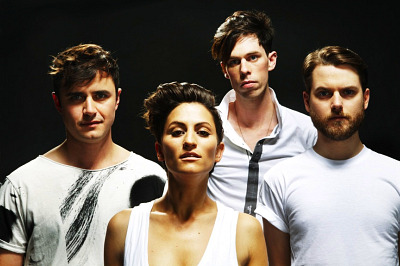 Check out this excellent club mash up of Freemason's remix of Disco Freak's "Take Me To The Sun" and Dragonette's "Easy," which is taken from their new album. That's a whole big pile of dance floor hotness that works very well together. Enjoy. (Click here to download Dragonette's new album "Fixin' To Thrill. On sale at 7Digital.com.)