Die Antwoord's new video for "Rich Bitch" is a mind-blowing visual extravaganza that you cannot afford to miss. The South African hip pop duo of Yo-Landi Vi$$er and Ninja is not afraid to stir up the status quo with their in-your-face delivery and straight up storytelling, and this video is a perfect example of that. The video is a perfect marriage of style and substance that is not for show.

But what I respect most about this video is that they dare to push the envelope and do it in a way that is classy and done in taste. Kudos to everyone involved in producing the video. Watch the entire video after the break and also watch Yo-Landi and Ninja talk about the song in a special video interview. 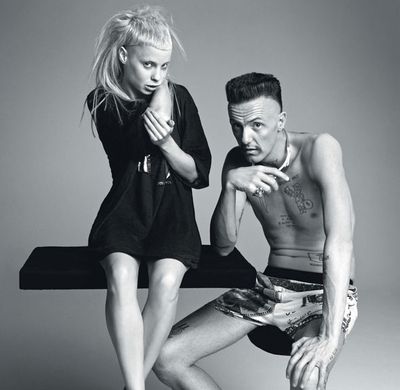 Die Antwoord stirs up a flurry of emotions. Their music is abrasive, raw, real, totally honest and yes, at times even endearing. The group's powerful and potent brew of hip pop is disrupting the musical equilibrium and has some skeptics even wonder if it is all an act.

In an excellent new interview with W Magazine, the South African duo addresses that exact question. "In South Africa people know what we are straightaway," says lyricist Ninja. "It’s just punk Afrikaans sh*t. But in America it’s a little alien, so they’re like [in an American accent], 'I don’t get it. It must be a joke. What are they doing? What is this?'"

"But also I was watching MTV, and I was like, Oh, this is why everyone thinks we’re a joke. Because everything is the same recipe, rehashed," singer Yo-Landi Vi$$er says .I" used to be into Björk and PJ Harvey, and they used to blow my mind. But there hasn’t been a pop star blowing anybody’s mind. Our music’s got flavor; it’s got skill. And we present it really well. And people were like, 'What the f*ck is this?"'

If you're ready for a little adventure, I highly encourage you to check out Die Antwoord's phenomenal debut album "$0$. Give it a few spins, listen to it, dive into it, tap to it, and most importantly, experience their fresh new sound.  Also, head to YouTube to see Ninja and Yo-Landi talk about each of the songs in a special track-by-track video series.

Die Antwoord goes straight for the jugular. They never cease to amaze me.