[VIDEO] Dev Premieres Video for New Single "In The Dark" (Must- Watch!) 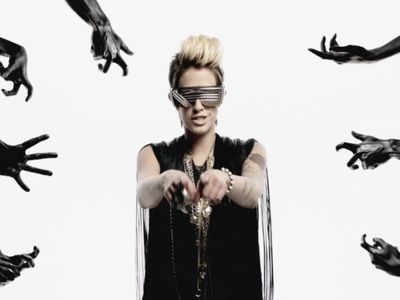 Dev's video for "In The Dark" is one of the singer's most ambitious projects to date. After the massive success of "Like A G6" and "Bass Down Low," Dev is rapidly coming into her own as a bonafide pop star with a unique sound and style that makes her stand out from the pack.

Directed by Ethan Lader, this spectacular new video for "In The Dark" proves exactly that. It shows the singer surrounded by oil-clad zombies, snakes, a tarantula and even a grim reaper to add a dark and haunting twist to the video. It's a scene that complements The Cataracs-produced summer jam perfectly. (Watch ArjanWrites.com exclusive behind-the-scenes footage of the making of the video.)

The video is a stylish, sensual, sassy and slappin' affair that firmly positions Dev as a blazing new force in pop to reckon with. Time to dig your dirty paws into this new hotness. Watch it after the break. (Download Dev "In The Dark" on iTunes or take in anywhere on Rdio) 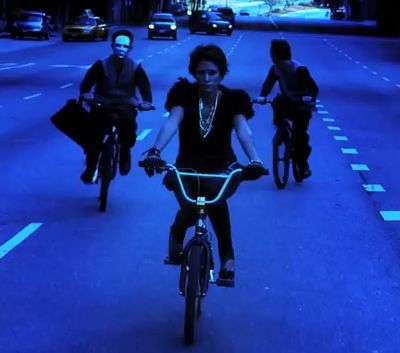 While eagerly awaiting the premiere of Dev's video for "In The Dark" later this week, check out her video for "Fireball" that Indie Pop released last week without much fanfare. Filmed last year by famed music video director Collin Tilley, the video shows an immaculately-styled Dev on her gold-plated BMX roaming around the streets of downtown Los Angeles together with her masked production pals of The Cataracs.

Of course, anything Dev touches doesn't stay a secret for too long and the video is already racking up lots of views on YouTube. It's a tight, slapping tune that comes with a very nice vocal break around the 2:10 minute. "Fireball" will keep you entertained for the next couple of days until Dev will unleash her biggest project to date. Watch "Fireball" after the break. (Download the excellent "Fireball" EP on iTunes or Rdio.)

Dev's forthcoming video for her new single "In The Dark" is one of the singer's most ambitious projects to date that will firmly position her as a powerful new force in pop to reckon with. After the success of "Like A G6" and "Bass Down Low," Dev is slowly but surely coming into her own and the alluring video for "In The Dark" turns things up a few notches. It further details her stylish and seducing brand of pop that has a universal appeal. Check out exclusive behind-the-scenes footage of the making of "In The Dark" plus previews of the final video. (Download Dev "In The Dark" on iTunes|Rdio) 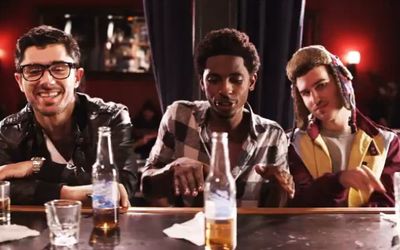 Malibu rapper Shwayze and The Cataracs are sipping a few brews and talking about sweet love on the lovey-dovey "Love Letter" that includes the vocals of Dev on the hook. The track is taken from Shwayze's new EP that he recorded while taking a quick break from his ongoing musical partnership with Cisco Adler. "Love Letter" shines in simplicty and is just right for the lazy days of summer and the summer flings that may come along with it. Watch the video for "Love Letter" after the break and grab a free MP3 of the song right here.

[PHOTO] Dev and Redfoo of LMFAO Backstage at Summertime Ball 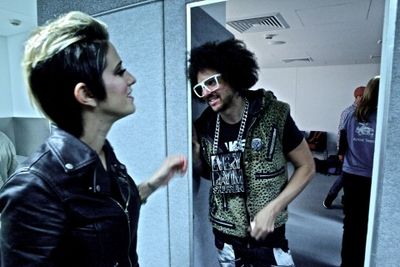 Check out this candid shot of Dev and Redfoo of LMFAO last weekend backstage at Capitol FM's Summertime Ball at Wembley Stadium in London. Both had lots to catch up on. Dev is releasing the video for her new single "In The Dark" soon and has finally broken into the U.K. top ten with "Bass Down Low." And LMFAO is about to release their new album "Sorry for Party Rocking" and celebrating the worldwide success of "Party Rock Anthem that has hit number one in a dozen countries. Wonder what else they could be chatting about. Perhaps a collaboration of some kind in the future. That sure would be one massive party stomper. (Source)