Noted by the BBC as one of the "brightest hopes for pop" in 2010, Daisy Dares You will finally release her debut single, "Number One Enemy," on February 22. It is a hyper catchy pop tune that will have you tapping along the second the intro hits. Popular London grime MC Chipmunk adds a chart-ready, urban flavor to the track.

Daisy Dares You is the nom-de-pop of British singer Daisy Coburn who brings a fraiche burst of energy to the scene.

At the surface Daisy's music may seem commercial and just all about good fun, but she has in fact quite a compelling story to tell. I listened to her forthcoming debut album in its entirety and it is by no means just a happy-go-lucky record.

Somewhere between being cheeky and cheery, Daisy rocks out and tells it like it is. Look out for tracks like "Rosie" and "Next Few Minutes" that are pure pop dynamite.

Say Hello to Daisy Dares You - But Don't Call her Avril Lavigne! 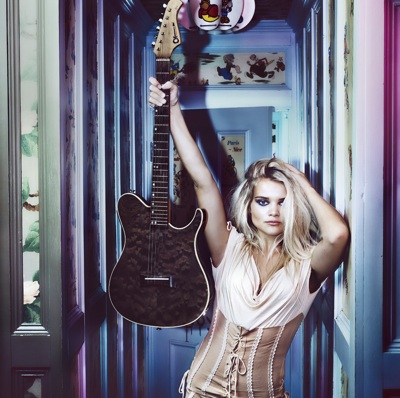 Remember that guilt-free MP3 from spunky British newcomer Daisy Dares You that I posted a few months ago? The 15 year-old singer has been working on her debut album that is filled with melodic, infectious pop rock and a heavy dose of girl power.

Just don't compare her to Avril Lavigne. "No! I hate that comparison," she spits in her biography. "Just because I'm female and young they have to put you in a box. Frankly, anyone who says I was influenced by Avril Lavigne can get stuffed." Well, don't say we didn't warn you.

Daisy is rather gets grouped together with other emerging artists like Florence and the Machine and Bat For Lashes. "Those are definitely the kind of artists that inspire me," she says. "But then when I write, it just seems to come out as pop."


Check out a cute EPK she filmed about recording her album. The video is interspersed with clips from her debut album that gives us a bit of a hint of what's to come. It sure sounds very, very promising. Her debut single "Number One Enemy" features U.K. hotshot rapper Chipmunk, which will be released in the U.K. on February 22.