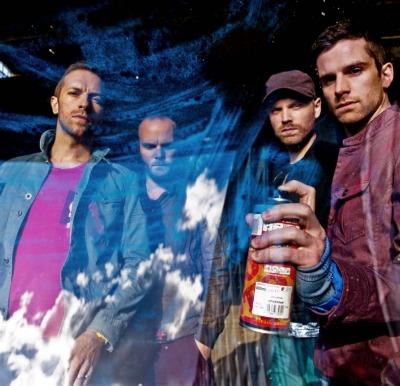 "Minor Minus" is nothing like the bright and uplifting "Every Teardrop Is Waterfall" that was such a gentle introduction to Coldplay's new sound. It's a bareknucle rock tune dominated by Chris Martin's menacing lyrics and Jon Buckland's rowling guitar riffs that only get a breather around the 2:00 minute mark for a shimmering break before quickly soaring back into the darkness.

This tune is definitely no single material, but it sure is some epic stuff that will spice up their live shows. And while on the top of live shows, make sure to tune in to Coldplay live at Glastonbury this upcoming Sunday on VH1 and Palldia HD at 10 p.m. EDT. This is the first time in the festival's forty-one year history that a full concert is televised in the U.S. Listen to "Minor Minus" after the break. (Download "Every Teardrop Is A Waterfall" on iTunes | Rdio)

Single Review: Coldplay "Every Teardrop Is A Waterfall"

In preparation of a few festival dates this summer, Coldplay released a brand-new single today to give fans a taste of their new music. "We're about to play a bunch of summer festivals so it's as good a time as any to put out a new song," the group writes in a brief press release that accompanies the media distribution of the single.

Titled "Every Teardrop Is A Waterfall," this new Colplay single introduces a fresh new sound that is driven by escapist lyrics and a combination of bright, uplifting melodies and shiny guitar lines that are a perfect fit for the starry nights of summer. The song is a worthy alternative to dance pop tunes that will likely rule the global charts in the weeks to come.

Coldplay neatly complements the song's grand, atmospheric production stylings (that is inspired by The Sacados '90s hit "Ritmo De La Noche") with universal and blissful lyrics about hope despite adversity. "Turn the music up, I got my records on," lead man Chris Martin sings. "Maybe I'm in the black, maybe I'm on my knees, but my heart is beating and my pulses start. Don't want to see another generation drop, I'd rather be a comma than a full stop." (Download)

Listen to it after the jump.

Continue reading "Single Review: Coldplay "Every Teardrop Is A Waterfall"" »