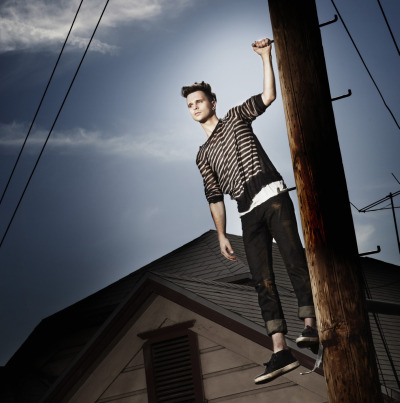 Singer Christian TV was pushed into the spotlight when he appeared on a recent episode of FOX's So You Think You Can Dance and Britney Spears tweeted that "When She Turns 18" would be the song of the summer to her massive amount of Twitter followers. Check out a totally guilt-free MP3 download of "When She Turns 18" to hear what all the fuss is about.

Hailing from Detroit's East side, Christian TV is the artist moniker for singer, designer, producer and multi-instrumentalist Christian Berishaj. He started out his career in alternative rock outfit Love Arcade that was signed to Atlantic Records back in 2005. After touring with the group for over three years, Christian decided to quit the band to give in to his urge to start producing and recording pop music. He left Detroit and settled in Los Angeles where he hooked up with Benny Benassi and Luke Walker to start work on his solo debut.

Now signed to Universal Motown, Christian is gearing up for the big time with a brand of pop that balances rock-infused beats, irresistible melodies and Christian's gritty delivery. "There’s no doubt that my music celebrates the idea of ‘escape,’” he says in a press release. “I want it to be fun, I want it to be all inclusive. But I also like to point out to people I’m bringing that Detroit grime to pop music. It’s not all pretty, if you know what I mean."

Christian TV "When She Turns 18"