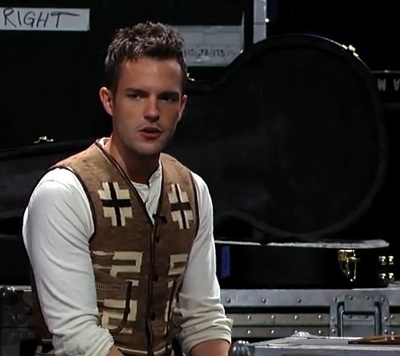 Brandon Flowers stopped by Jimmy Kimmel Live on Monday to perform "Crossfire" and to sit down with the comedian for an extended web interview to talk about "Flamingo," the future of The Killers, growing up in Las Vegas, '80s new wave, being a bell boy at the Gold Coast Hotel and much more. Hilarious interview, and yes, Jimmy even gets a few laughs out of Brandon who always seems a bit coy and uncomfortable in TV interviews. Watch the four part video interview after the break. And don't forget to get your copy of "Flamingo" this week. The album hit number one in the British album chart last week, beating out Katy Perry.

Brandon Flowers stopped by the studios of iheartradio.com for a brief interview and to sing a few tracks from his album "Flamingo" that will be released in U.S. stores this upcoming Tuesday. Watch a brief Q&A with Brandon above that is interspersed with fragments of acoustic versions of "Crossfire" and Killers favorite "Jenny Was A Friend Of Mine." Watch a full version of "Hard Enough" and "Crossfire" after the jump. 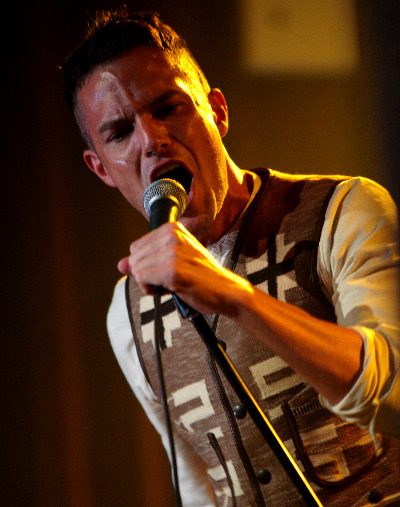 There's never such a thing as too much Brandon Flowers. So when the Killers frontman performed for only 45 minutes last week at New York's Highline Ballroom it was simply not enough to satisfy the insatiable appetite of his cheering fans.

But let's be fair. This was not a Killers show. Fans could not expect him to crank out the entire Killers canon and play for two and half hours. This night was all about Brandon and his forthcoming new solo record.

Over the past years, I have seen The Killers perform a bunch of times - from Los Angeles to Berlin, and from Atlanta to Las Vegas. It was fun to see their new wave-ish hot pop fuss turn into neon-lit, arena-sized rock shows that have crowds dizzy on their feet everytime.

In the early Killers days, Brandon told me that there were moments that he suffered stage fright. What helped him was to have his keyboard positioned right on the middle of the stage to keep him steady in his comfort zone.

Over the years, from album to album, and from tour to tour, his keyboard has slowly moved to the side of the stage, giving him a chance to overcome his anxiety and get more comfortable in the spotlight.

Most telling about his first New York solo show on Thursday was the total absence of a keyboard. It was all about Brandon Flowers, front and center. No fuss, no frills.

If this forthcoming solo album and tour will show us one thing, it is that Brandon Flowers has turned into a versatile, confident entertainer, and that is an accomplishment that must be noted. Even tough at times, he still appears somewhat uncomfortable, it is much more a reflection of his stirring, soul-searching lyrics than his actual state of mind. 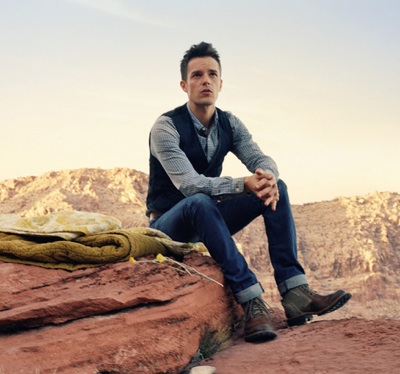 If you follow me on Twitter or Facebook, you know that I have been wondering for weeks about some solid remixes of Brandon Flowers' solo single, "Crossfire." The song is a grand and epic piece of Americana that has all the right ingredients for a great remix.

New York producer and "serial fixer" Chew Fu put together a fantastic and fiery revamp of the song that he is sharing exclusively with ArjanWrites.com. His new version does everything the song deserves with a blazing and propulsive new production while staying true to Brandon's sublime original. Listen for example to his little glitter dip to extend the song's powerful chorus around the 1:30 minute mark and the quick, intense build up that hits around the 4:40 minute mark. Very nicely done.

Reach up your hands to the burning Nevada sky, close your eyes and dance along during the last days of summer. Thank you to Chew Fu for sharing the hotness. (Click here to pre-order Brandon Flowers "Flamingo" on Amazon.) 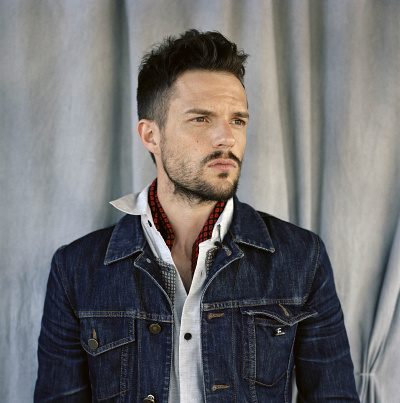 Ever since Brandon Flowers' "Crossfire" was released, I've been hoping to hear some great remixes of the song. Finally, a few remakes are surfacing in anticipation of the release of his solo LP "Flamingo that will be out September 14.

Last week, a snappy house revamp by DJ David Morales surfaced, and today ArjanWrites.com reader Antonio tipped me about the Loose Canons remix, which is officially titled the Loose Canons Rinse Your Body Down remix.

The crafty producers of this chunky piece of work repackaged Brandon's acapellas in a groovy house beat and added some quirky bells & whistles including a funked up piano riff that loops through the entire remix. Fun mix that provides a fresh new perspective on the original.

I'm still hoping for that epic Stuart Price remix that I know must be out there in Island's vault waiting to come out. More about Brandon Flowers' show that I saw in New York City on Thursday soon. (Click here to pre-order Brandon Flowers' "Flamingo" on Amazon.com)