I had a chance to catch up with American Idol alumn Blake Lewis earlier this week to casually discuss his brand-new album, "Heartbreak on Vinyl." The record is a compilation of hot electro and pop tunes that the Seattle singer wrote and produced with people like Ryan Tedder (OneRepublic) and Dave Aude. Make sure to give this record a spin if you're looking for some catchy synth pop with a dance floor attitude. Also, preview and download an exclusive maxi EP of the album's first single "Sad Song" here.

I appreciate how Blake chose to take an unexpected direction after making it to the Idol finals and carving out a niche for himself in electro-pop, a genre that is not all that mainstream in the U.S. He's anything but cookie cutter. We chatted about that extensively.

We also talked about Blake's support of the gay community and their quest for equal civil right in the U.S. He says he has never had a guy crush himself, but he has been a "road gay," being on a touring bus with 5 other guys.

Scroll to the 11:20 minute mark when Blake also introduces us as his roomate's dog Diddy who started barking during the interview. Very cute.

(P.S. Hope you all like these new video interviews. I have many more coming. It's an interesting experience for me to conduct interviews this way. A few learnings already. Tuning while I go.)

Whoa! Blake Lewis! Syntastic! Who'd have thought? I heart. Produced by none other than BT. I feel a hit, hit, hit coming on. 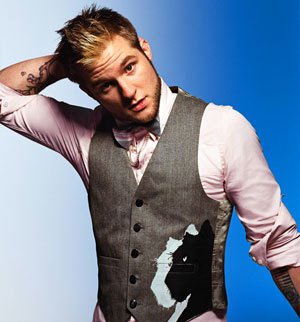 Blake Lewis is returning to American Idol on Thursday to perform his brand-new single "How Many Words."

It is quite frankly one of the few songs on his debut LP I don't care too much for. I think it is the odd combination of mid-tempo balladry and sampled beatboxing that turns me off. Why does Clive Davis want Lewis to jumpstart his momentum with this song? Perhaps the consensus is that the singer's trademark beatboxing will allow him to reconnect with Idol's fickle audience. Who knows.

Instead, I think Lewis should have gone with "1000 Miles" or even "End Of The World," a crisp and melodic tune that is filled with pop-worthy melancholy. Plus, that track reminds me of Erasure and that is not a bad thing.

Click here to read my interview with Blake Lewis that I did for Bravo TV.

Listen to Blake Lewis "End Of The World"

Listen to Blake Lewis "How Many Words"