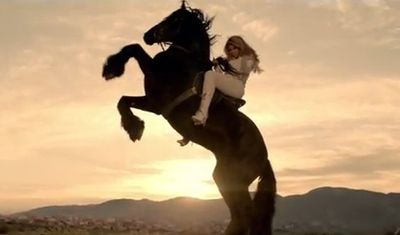 Beyonce gives a whole new meaning to the word "fierce" in the spectacular video for her new single "Run The World (Girls)." Set in a post-apocalyptic world that could have been taken straight from the set of the Book of Eli, Beyonce looks more in control than ever while performing the ultimate girl power anthem as a radiant warrior princess. "We're smart enough to make these millions, strong enough to bear the children, then get back to business," she chants, ready for battle.

The sizzling video adds a steady punch to the song with its massive dance scenes, dazzling fashion and Beyonce's hypnotic performance. If you ever had any doubt about Beyonce's new project after hearing "Run The World (Girls)," this video will turn you right back to being a believer. Switch's soundboard-savvy, abrasive production may have been off-putting to some at first, but its roughed up, frenetic beats are intended to be a battle cry, not another glossy R&B pop hit that can be considered safe and expected.

The gutsy "Run This World (Girls)" reminds me of songs like Justin Timberlake's "Sexy Back" and Black Eyed Peas' "Boom Boom Pow" - big, startling productions that create a disconnect with the past and give way to some different and new. And that's exactly Beyonce's point. If the song and video tell us one thing, it is that there's a new Beyonce's in town and you better pay attention. Ring the alarm! (Watch the video on Vevo.)