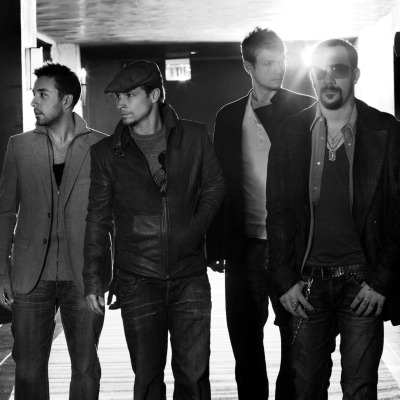 After more than 15 years in the music business, the Backstreet Boys recently released their seventh studio album. Titled "This Is Us," the disc features an impressive list of A-list producers who helped the quartet usher in a new phase of their career with heartfelt ballads and catchy uptempo tracks. Their sound is still decidedly their own with their signature harmonies and distinct solo vocal contributions.

It may not be getting the attention that pop newcomers are receiving, but "This Is Us" is a solid pop record that easily ranks among the best pop discs of the year. And fans everywhere agree. The group is currently on an extended world tour selling out venues from Tokyo to London. Some things never chance.

Recently, I had a chance to meet up with AJ McLean (pictured right) to talk about the group's new album. We talked about working with hitmakers like RedOne and Jim Jonsin and much more. AJ also talks about the importance of the gay community early on when the group just started out. He shares a candid story about performing at Tampa's Gay Pride many years ago. Read on for all the scoop. (Click here to listen to Backstreet Boys' "This Is Us.")

Arjan: Congratulations with the release of the new Backstreet Boys record. Your seventh!
AJ: That's right! Thank you very much. We're very proud of this record. Honestly, this is our favorite record. We feel every song is a hit, so we're really proud of it.

After 15 years in the business as a group is chart success still as important as before, or are you more interested in the artistic process?
It's a little bit of both for me. The creative aspect is very important to us and we want to be trendsetters. But we also find it important to make music for the masses and perform. We definitely want to make more records as long as the fans want us to keep doing it.