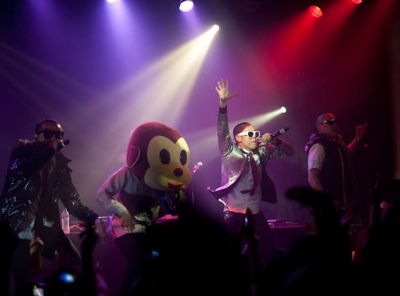 The guys from Far East Movement sure know how to get the party started.

Riding high on the global chart success of "Like A G6," the Los Angeles group is on a whirlwind European club tour to promote "Like A G6" and their excellent new single "Rocketeer" (featuring Ryan Tedder). Both tracks are taken from their new album "Free Wired" that will be released in Europe early next year. I caught the group on Monday night at Paradiso in Amsterdam were they played a sold out show for a raving crowd.

After the group's DJ Virman warmed up fans, Kev Nish, Prohgress and J-Spliff climbed the stage to perform tracks from "Free Wired," including the stomping opener "Girls On The Dancefloor," "Don't Look Now," "Go Ape" and the instant crowd pleaser "Like A G6" (watch video of the intro.) The group kept the room on fire with a non-stop, high-energy performance of their L.A. bred dance-pop-hip hop tunes that had the audience dizzy on their feet from beginning to the end.

They even injected a ballad like "Rocketeer" with tons of energy, having the crowd waving their arms back and forth to keep the energy up, up, up. Far East Movement was here to have a good time and their positive energy was infectious. Totally fun and tight show by a group of super nice guys who are going places.

If you're in Paris, make sure to catch them tonight at Palais Maillot. Far East Movement will be in London on Wednesday (Jalouse) and Thursday (Vendome). (A thank you to Universal Benelux for their hospitality and a very special thank you to Martin for introducing me to the band and our fun sweet & crunchy chat.)