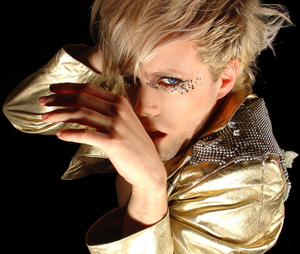 Justin Tranter is a rock god in the making.

The deliciously "kunty" frontman of New York glam-rock band Semi-Precious Weapons has been stirring up a sensation in clubs around the country and in the U.K. in anticipation of their debut LP "We Love You." The album will be out on Razor & Tie Records later this year.

I briefly ran into Justin and the band (at an escalator of all places) right before the taping of the MTV Logo NewNowNext Awards on Times Square last week. The group made a quick photo appearance before heading over to play a show at Irving Plaza.

Tranter likes to hang out at fancy hotel bars, because their managers often "get a little upset when men in full makeup dance around in 6-inch heels in front of all the nice people staying there for the week."

Three albums that had the most influence on Tranter are Patty Larkin's "Perishable Fruit," The Little Mermaid soundtrack and Patty Griffin's "Thousand Kisses""

The singer considers the the entire Mandy Moore catalog his guilty pleasure songs.

If he wasn't a performer, Tranter admits he would be "collecting cans and cashing them in at Key Food, because I actually did that for awhile and I was pretty into it."

Not only did Tranter release his very successful Fetty jewelry line , but he also entered into a partnership with Donna Karen to release his own brand of sneakers.

The first concert Tranter ever saw was a Paula Cole concert: "It was fucking stunning. She wore masks, growled, screamed, and sang her ass off. Actually it was kinda rock ’n roll."

Designing jewelry should come as no surprise as his mother is a designer of engagement rings. "She only does like ten to fifteen rings a year, but when they’re massive diamonds it ends up being a good time."

Head over to the Semi-Precious Weapons web site to stock up on Tranter merchandise, including "fucking gorgeous gloss" and a "genderless hoodie"

Great Britain's Princess Beatrice is a closeted Tranter fan and treated herself to $3000 Fetty ring at Barney's last week.