Listen to A-Ha "Riding The Crest"

A-ha's "Foot Of The Mountain" may turn out to be one of the most noteworthy pop albums of 2009. Who would have thought? Currently only released in their home country of Norway, this album is the trio's tenth studio album and arguably one of their finest of their career.

A few weeks ago, I introduced you to the album's excellent title track, an emotive song that proved that A-ha still has plenty of relevance in today's competitive pop landscape. The other tracks on "Foot Of Mountain" are as equally as strong as its lead track with grand, powerful ballads, '80s-inspired uptempo tracks and Morton Harket's sugar-sweet choir boy vocals.

Steve Osborne was one of the main producers on "Foot Of The Mountain." He previously worked on albums from New Order, Depeche Mode and U2.

My favorite album cuts include the synth-laden "The Bandstad," the Erasure-like "Riding The Crest" (the album's second single) and the hyper-melodic "What There Is." "Sunny Mystery" shines with its dreamy, yet forceful soundscape that is accentuated by a grand piano riff.

It has been over 20 years since "Take On Me" first hit the global charts, but boy, not much has changed since then. A-ha still knows how to crank out a quality pop album. One of my favorite pop albums of the year so far.  You can stream the entire album here after you enter contact information.

Listen to Brand-New a-ha Single "Foot Of The Mountain" 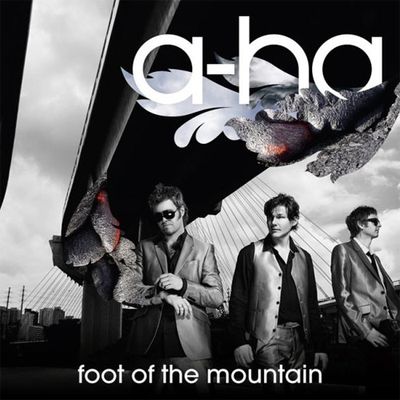 Check out the fantastic, Keane-like new single by Norwegian pop trio a-ha. To most people stateside a-ha is just that one-hit wonder band that had an '80s smash with "Take On Me" (arguably one of the biggest songs of the '80s in fact). The reality is that a-ha never went away. The tree have continued to make great pop albums. This new single, titled "Foot Of The Mountain," is the title track of their tenth studio album. I'm glad to conclude that after all those years a-ha still delivers the goodness (and great album art).

Listen to a-ha "Foot Of The Mountain"