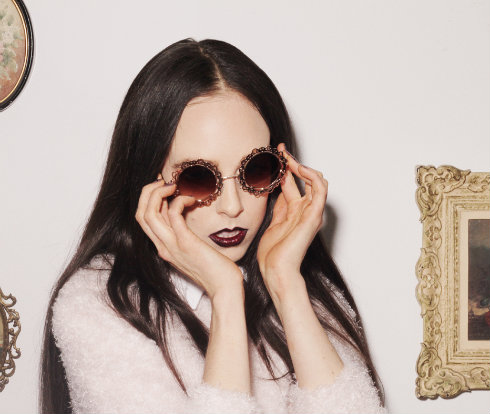 As long as there is pop, there is hope. And pop newcomer Allie X gives us plenty to believe in. Following the successful release of her synth-pop gems "Prime" and "Catch," the rapidly-rising Canadian singer now serves up the brand-new "Bitch." It's another slice of sonic excellence that further details Allie X's multi-faceted brand of pop that combines music, visual art and a very distinct point of view. Ruled by brooding synths and Allie's mesmerizing vocal performance, "Bitch" deliberately captures some darker undertones that show off her moodier side.

In a phone interview earlier today, Allie explains that "Bitch" explores  the "shadow self" construct that was developed by psychiatrist Carl Jung. It's a theory that investigates the relationship between conscious and unconscious processes of the psyche. "The shadow self personifies things that you don’t want to acknowledge about yourself or that you are ashamed off," Allie X explains. "It's the darker side of yourself that is buried in your unconsciousness. You need to bring it out because otherwise it can be dangerous."

Allie explains that "Bitch" was one of the first songs she wrote and recorded in Los Angeles. It came together very quickly when she was having a bad day. "I holed myself up in the studio to work on music," she says. "The beat came first and then the lyrics started to flow. It was quick. It took a day. I didn't even conceptualize it in advance. It just came out this way and I realized afterwards what it all meant. I'm very proud of how it came out."

She adds, "['Bitch'] conceptualizes the relationship I have with myself. There's a line 'I'm a bitch/Come out' that illustrates that. The song is dark and domestic. It so interesting that after I finished the song I felt very relieved."

In a world too often ruled by cookie-cutter pop, Allie X serves up both style and substance with her music. It's pop music loaded with artistic value that perfectly balances light and darkness. It's the interplay between these two that make pop music so endlessly fascinating. Allie X has a firm handle on both elements, and puts forth a unique perspective that is very exciting to watch grow and develop.

Follow Allie X on Twitter, Facebook and Tumblr for more exciting updates soon. (A big thank you to Allie X for taking my call today and talking so candidly about her music.)