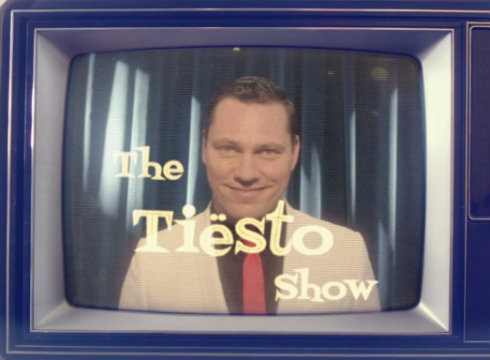 Tiësto is a bonafide dance music institution. For the past twenty years, he has ruled dancefloors across the world with his music that has inspired and influenced a whole new generation of DJs that's emerging now. The superstar DJ is getting ready to turn things up a few notches and cross over into the pop world with his forthcoming major label debut album, titled A Town Called Paradise, that will be released on June 16. The record was introduced by the single "Red Lights" and while that track is still gaining momentum, Tiësto has unleashed his new single "Wasted" featuring pop crooner Matthew Koma this week.

When I spend some time with Tiësto prior to his Hakkasan show in Las Vegas back in February, I congratulated him with the success of "Red Lights" in the pop charts. It's was an impressive accomplishment for the DJ who is one of the biggest names in dance but hasn't been able to fully crack the pop world in North America until now. He smiled and said that he had even bigger things coming, referring to "Wasted" as one of his most exciting projects to date. After hearing the song, I now know exactly what he meant.

"Wasted" perfectly shows off Tiësto musical versatility. It combines an instantly catchy, feel-good chorus with punchy beats that will get any party started. The song is also a crowning achievement for Matthew Koma. He's the King of EDM features, writing one incredible top line after the other, and his vocals on "Wasted" are some of the best he has done so far. The video for the song premiered this morning and takes viewers to a 1960s house party with Tiësto and Koma entertaining a group of Stepford Wives.

A Town Called Paradise tracklisting is: