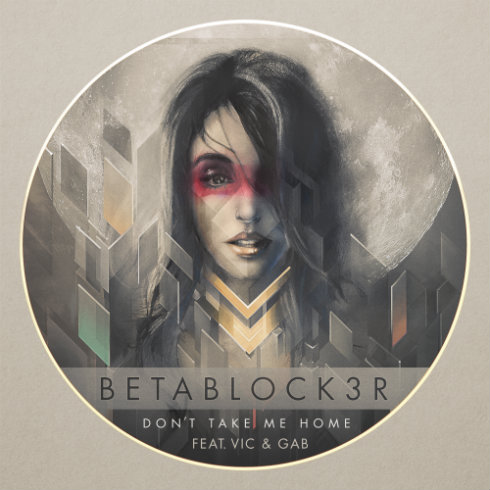 After producing a series of high-grade remixes for other artists (like this one and this one), production outfit Betablock3r is unveiling their long-awaited debut artist single today. Titled "Don't Take Me Home," the song is a brightly glowing dance-pop confection filled with resplendent synths that features the lush and airy vocals of emerging Milwaukee pop duo Vic & Gab. Play it during a late night drive, a sunset party on the beach or whenever you need a little escape from whatever is dragging you down. Betabloc3r brings out the sunshine and happy vibes with "Don't Take Me Home" no matter where you tune in.

Betablock3r's Chris and Ryan hail from Southern California while Vic & Gab reside in Wisconsin. The four worked remotely on the song that took a fresh new turn after Vic & Gab wrote vocals for an early version of the song. "Originally it sounded like a completely different from what it eventually became. We had written it and sent it out to a couple of writers, and forgot about it," Chris and Ryan write me in an email. "So one day we get an email with this old song we forgot about and these beautiful melodies that Vic and Gab wrote to it. The track took on a completely new life. We immediately loved what we heard."

In fact, Betablock3r liked Vic & Gab's ideas so much that they decided to completely rebuild the song from the ground up. "We had [Vic & Gab] head over to a studio near their hometown in Milwaukee to track the ideas they had written. When we received the vocal takes from the studio they sounded so good we decided the music wasn't cutting it anymore and rewrote the music around the vocals. There are still some remnants of the original track in there but overall it's an entirely different song."

It was an equally productive and pleasant experience for Vic & Gab. "We met Chris and Ryan over the phone and instantly clicked with them. We loved the track they originally sent us and as we started working on it we just fell more and more in love with it. The guys did a great job giving it a breath of fresh air once we were done with our vocals. We couldn't be happier with the end result."

"Don't Take Me Home" is an exciting milestone in Betablock3r's burgeoning artist and production career that has us curious for more. The single will be released everywhere on April 22. Make sure to check it out on Beats Music.