« Hot New Pop Alert: Listen to Galantis 'You' [Review] | Main | A Few Words about Why Snapchat is my Favorite New Social Sharing App » 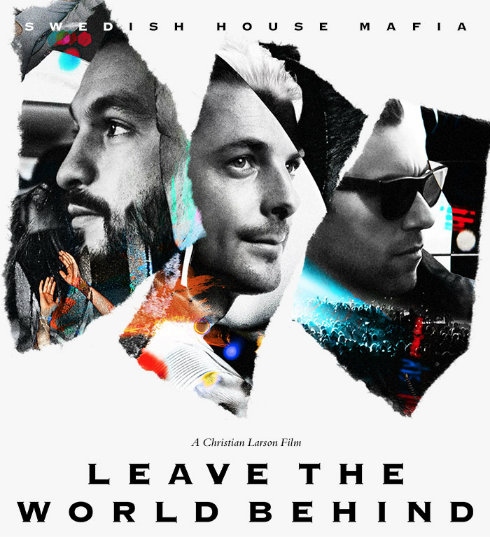 Swedish House Mafia's compelling new documentary film Leave the World Behind tells many different stories. Its tells a tale about the global rise of EDM, the deep passion of house fans, the importance of dance music festivals and the pressures of touring around the world for months at the time. But most of all the film tells a story about three Swedish friends who bonded over their love for house music and ended up conquering the world. Their unparraled success turned out to be both a blessing and a curse as it ultimately caused their friendship to unravel.

Leave The World Behind received its world premiere last night at the South by Southwest Music, Film and Interactive Festival in Austin, Texas with many of the people that worked on the film in the room, including director Christian Larson, executive producer Amy Thompson and second-unit director Carl Lindstrom. Many of their family and friends had shown up as well to cheer on this very special new film that truly is the final statement Swedish House Mafia's Sebastian Ingrosso, Axwell and Steve Angello make about the group in public.

The 95 minute documentary depicts Swedish House Mafia's final "One Last Tour" that kicked off in Sweden in November 2012 and ended with the group's final performance at Miami's Ultra Music Festival in March 2013.

Director Larson expertly combines exhilarating, multi-camera live concert scenes with candid backstage footage that gives viewers an in-depth look at the group's life on the road. The movie also includes scenes of Sebastian Ingrosso, Axwell and Steve Angello at home in Sweden and Los Angeles to give fans a glimpse into their personal lives that adds depth to their characters as depicted in the movie. The three are not only global house music icons, they are also husbands and fathers who have priorities far beyond Swedish House Mafia. Lastly, Larson also sat down with each one of Swedish House Mafia's members in confessional-type scenes to get their individual take on what caused the group to split.

Many fans may wonder if Leave The World Behind will explain why the group abruptly broke up after their meteoric rise to fame. It's a question that's been persistently asked after the group announced their break up before embarking on one, final tour.

The film shows some of the dynamics that caused the group's decision to end their run and go separate ways. When Ingrosso, Axwell and Angello are asked about the break up individually it becomes clear that what started back in the day as a fun project without real intent turned into something much bigger than they ever anticipated. That ended up impacting their friendship and ultimately their creative partnership.

They say a picture can tell a thousands words and in the case of Leave The World Behind that is very true. One of the most telling moments is when director Larson cuts in some vintage footage of Ingrosso (with spiky purple hair), Axwell and Angello when they first met years ago and are having wild fun together. Those scenes are a sharp contrast to some of the "One Last Tour" backstage footage of the three spending time together in hotels and backstage with nothing to say and each going their own way.

During a Q&A after the movie, director Christian Larson was asked if he thinks that group will ever reunite and his answer was a firm "no." As someone who has been on the road with Swedish House Mafia for months on end, he's most certainly someone who can make a proper judgement call here. He also noted that he thought it was very respectful of the group to end on a high note. He smiled and added, "The film also shows you how guys sometimes deal with their problems, we're not always the greatest and talk about things. We rather just move on."

It's sad to see that house music's biggest supergroup decided to call it quits but Leave The World Behind does a superb job documenting what made this group so unique and truly a global phenomenon in the first place. Swedish House Mafia raised the bar for dance music forever.

Leave the World Behind will premiere in Stockholm, New York, London and Las Vegas today. No wide release in theatres has been scheduled at this time.