arjanwrites.com: A Look Back: A Few Words About Some of GRAMMYs Most Memorable Moments

A Look Back: A Few Words About Some of GRAMMYs Most Memorable Moments 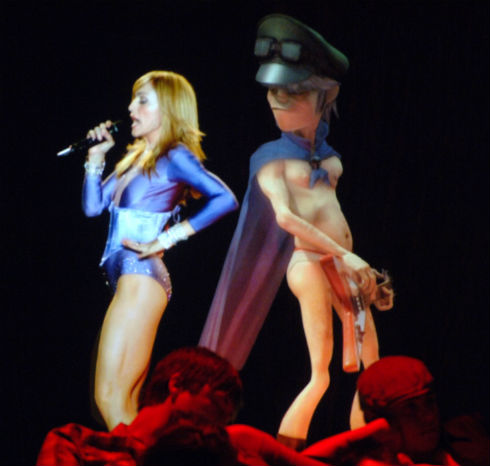 Madonna performing with the Gorillaz at 48th annual GRAMMY Awards

Get ready! We're less than two weeks away from the 56th annual GRAMMY Awards that is shaping up to be a fantastic night of music with performances by Taylor Swift, Pink, Daft Punk, Macklemore & Ryan Lewis, Paul McCartney and many others. The GRAMMYs will air live on CBS on Sunday, January 26. This is not only a good time to discuss nominees and preview the performances, but it's also a great moment to look back at some of the most memorable GRAMMY performances that set the show apart from all of the other award shows out there. The GRAMMYs move culture and the performances mentioned below are solid proof of that.

Jennifer Hudson Performs "I Will Always Love You" (54th GRAMMYs)
Whitney Houston passed way too soon and so very unexpectedly on the eve of the 54th GRAMMYs in 2012. I was at the Beverly Hilton Hotel to cover the Clive Davis Pre-GRAMMY Gala and I will never forget how surreal it was to be at the hotel where this event was taking place on the first floor while officials were investigating her death a few floors up. Show producers had to scramble to pay proper tribute to the superstar and asked Jennifer Hudson (also a Clive Davis protege) to sing a stripped down version of "I Will Always Love You," the biggest selling single of all time. It was the perfect choice for a very sad evening that had viewers everywhere tear up and mourn the loss of one of music's greatest icons.

Pink Performs "Glitter In The Air" (52nd GRAMMYs)
We always knew that Pink posessed heaps of girl power, but her jaw-dropping performance of "Glitter In The Air" at the 52nd GRAMMY Awards took things to a whole new level of incredible. After walking through the audience from the main stage, the pop star (turned dare devil) wrapped herself in a simple sheet and was pulled up high in the air while vocally not skipping a beat. If that wasn't impressive enough, Pink started spinning and twirling while dangling from the arena ceiling and getting splashed on with water, again, without having it impact her vocal delivery. It's a truly breathtaking performance that I enjoy watching over and over again.

Madonna & Gorillaz Peform "Feel Good Inc/Hung Up" (48th GRAMMYs)
The live GRAMMY telecast traditionally starts out with a bang. Whether that's Prince dueting with Beyonce or Elton John hitting the piano with Lady Gaga, the GRAMMYs' opening number is always one to remember. One of the most innovative and memorable openings of The GRAMMYs was Madonna's partnership with the Gorillaz for the 48th GRAMMY Awards in 2006. The animated Gorillaz kicked off the performance with a bit of "Feel Good Inc" before they were joined by a pre-taped hologram of Madonna. That segment segued into a stomping version of "Hung Up" with the real-life Madonna and her troop of dancers on stage. It was a groundbreaking live event with innovative holographic technology designed by Musion Eyeliner, the company that would later design the much-talked-about Tupac hollogram performance at Coachella in 2012.

Michael Jackson Performs "Man In The Mirror" (30th GRAMMYs)
There are many, many memorable Michael Jackson performance to write about, but his apearance at the 30th GRAMMY Awards in 1988 is one of my all-time favorites. The King of Pop performed a stirring version of "Man In The Mirror," the 4th single taken from Bad that was released in January of 1988. This special live rendition of "Man In The Mirror" reminds us once again that Michael Jackson knew how to create magic on stage. His vocal performance was simply flawless and so incredibly inspired. Especially during the end of his GRAMMY performance when he falls down on his knees and cries out his wish for people to change their ways to make this world one worthwhile living in.

Beyonce & Tina Turner Perform "Proud Mary" (50th GRAMMYs)
Beyonce's soaring tribute to "Sarah Vaughan, Aretha Franklin, Chaka Kahn and historical women" who performed on the GRAMMYs stage follows her equally impressive teaming with Prince in 2004. After listing some of the iconic female artists that paved a way for her, Beyonce proudly introduced Tina Turner as "the one legend who captures the essence of all of these ladies." It's a rocking performance that shows off the raw and undisputed talent of these two fine ladies that wowed the crowd and is truly one of GRAMMYs best moments to date. It's also one of Turner's very last high-profile public performances. She was 68 years-old at the time and decided to come out of retirement to perform with Beyonce that was her way of passing the torch to a new generation of artists.