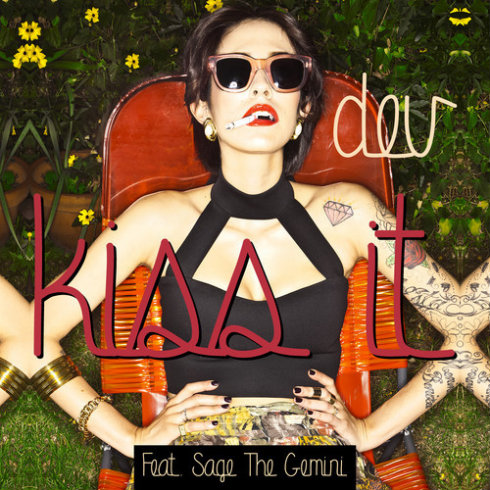 After keeping us in the dark for a little while, Dev returns gloriously with new single "Kiss It" (featuring Sage The Gemini) that is the first track taken from her forthcoming new EP that will be released early 2014. The grand Dame of Sass gives us everything we hoped for and more on "Kiss It." It's a punchy blend of dance, pop and hip hop that is loaded with girl power and marked by cheeky lyrics and forward-thinking production stylings that are all drenched in Dev's genuine brand of cool. The expert production is courtesy of none other than soundboard wizard Hitboy who previously produced GOOD Music's "Clique," A$AP Rocky's "Goldie" and a track on Britney Spears' forthcoming new album.

"Kiss It" feels like a fresh new start for Dev that follows big changes in her personal and private life in the last couple of years. After she was propelled to the top of the global pop charts as the featured vocalists on Far East Movement's "Like A G6" (together with The Cataracs), Dev dilligently worked on songs for her debut album while touring non-stop all over the world. More hit tracks followed including "Bass Down Low," "Backseat" and "In The Dark" that introduced an edgy new dance-pop sound that put Dev in pole position for continued success.

The Bay Area singer's success was also fueled by high-profile collaborations with people like Timbaland, David Guetta, JLS and Martin Solveig who featured her on their tracks. The release of Dev's (very good) debut LP "The Night The Sun Came Up" was delayed several times to finetune the final collection of songs and to give her time to be a mother. Dev announced that she and her fiancee Jimmy Gorecki were expecting a baby right before the scheduled release of the record in September 2011.

"The Night The Sun Came Up" was eventually released early 2012 to glowing reviews and was followed by a tour and appearances at South by Southwest and the Ultra Music Festival. Things took an unexpected turn in the summer of 2012 when Dev decided to split with her long-time management to reset her career and start with a clean slate.

It was as if Dev decided to take two steps back in order to take three steps forward. In a candid interview with our friends at Idolator, Dev reflects on the past and explains that she learned a lot of her experiences of the last two years. She looks refreshed, focused and ready to go at it again with new music that may lean a little more R&B. "Kiss It" clearly bridges where Dev came from and where she's heading next. It's a smart move as it will excite her fans and hopefully make many new ones. 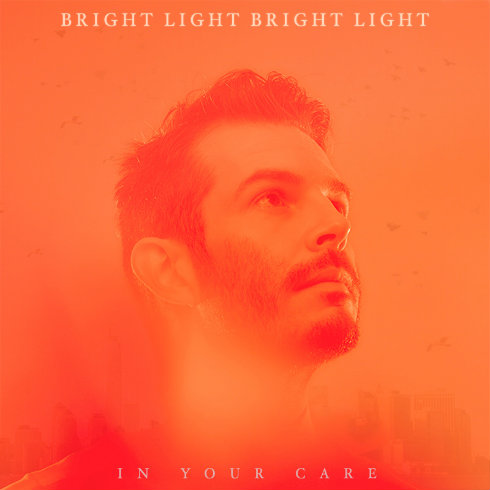 Following the success of his fantastic debut album on both sides of the Atlantic in 2012, Bright Light Bright Light (aka Welshman Rod Thomas) has spent much of this year in New York City to write, record and perform new music. The talented pop gentleman left his home in London to seek new experiences and inspirations, and judging from his excellent new music his decision paid off. In fact, being away from family and friends has directly inspired his new EP, entitled In Your Care, that looks at "the distance between families when people move away, and what keeps them together," according to a press release.

"In Your Care" is the title tune from the singer's forthcoming 5-track EP that includes collaborations with Jon Shave, Ian Masterson and Andy Chatterley. One of the EP's stand outs is "Same Dream" that was a crowd favorite when Bright Light Bright Light toured with Ellie Goulding in the UK. It's a gripping dance song written about losing yourself to someone and losing yourself in the moment.

Another big tune is "An Open Heart" that Thomas wrote with Ian Masterson (who produced some of his favourite 90s remixes as Trouser Enthusiasts). It's a sleek and stylish electro-pop tune featuring vivid storytelling that captures both vulnerability and hope. According to Thomas, "An Open Heart" looks at perception, and how easy it is to miss the beauty of a moment. 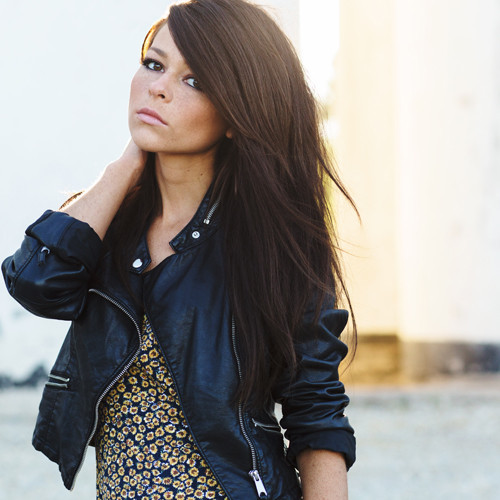 Cady Groves sings like she means it on her freshly-unveiled new track, entitled "U Can Have My Car (Inadequate Lover)," on which she vents about a love gone sour for all the wrong reasons. "I dated a gorgeous guy who sucked a lot at everything besides being good looking," Groves writes on her SoundCloud page." I guess I'm not shallow, because after dating for two weeks, I couldn't stand his insatiable desire for the material things in life." Following into the footsteps of her RCA Records label mates Pink and Kelly Clarkson, the rising pop sensation turned her bad experience into a fiery pop-rock stomper. It's the perfect antidote to all the inadequate lovers out there who care more about what you're wearing than you who is wearing it. "You can have my car but I'm going to hold on to the keys of my heart," Groves sings on the track, which sums up the sentiment of the song perfectly. It's a fun and hooky pop tune with a message that many will be able relate to. 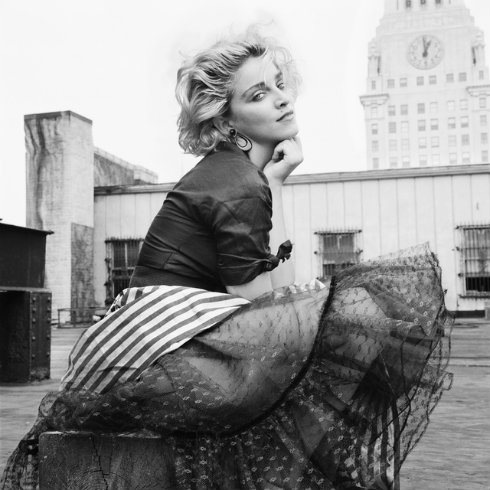 No matter what pop is dominating the charts today, Madonna remains the undisputed Queen of Pop who continues to inspire, encourage and entertain millions of people (and many of her younger peers) around the world. It's been thirty years since the release of her self-titled debut album that kicked off her groundbreaking career and changed the world of pop music forever.

New York City's famed Milk Gallery is celebrating Madonna's early years in New York City with a special exhibit of photographs of the pop superstar that were taken by Richard Corman.The collection of 50+ photos comes along with candid commentary by the photographer that provides more insight into the life of Madonna before her rise to fame in a city that was a rich breeding ground for new ideas, music and talent.

A recurring theme in Corman's commentary is Madonna's charisma and star quality that was instantly palpable for the people that came in contact with her. Particularly telling is his story about meeting Madonna for the first time when he went to visit the pop icon to be in her tiny apartment on Manhattan's gritty Lower East Side. "There was a group of guys hanging outside of her building, and she leaned over the banister and yelled down from the fourth floor and the seas just parted. I saw those eyes, and at that point it was clear to me that I was walking up into something of infamy – there was some kind of magic there and she didn’t disappoint."

The early 1980s was an incredibly thriving time in New York City that has influenced the work of Madonna up until today. After moving from Michigan to New York City, the pop superstar immersed herself in New York's underground club culture that was a vibrant blend of punk, disco and hip hop, and turned out to be a rich breeding ground for cultural and artistic innovation.

In addition to telling Madonna's early story, Corman's photography also captures the excitement of New York City in 1983. Milk Gallery writes on their web site: "[The photos] capture not only Madonna’s rebellious spirit but also the mood of the cultural revolution sweeping through the city’s youth."

Corman says, "It was a time in the city where the energy was just crazy wonderful. It was this carnival of creativity going on, especially downtown, and you just felt it. At that time I was leaving Avedon’s studio and going out on my own and I was photographing the Keith Harings and the Basquiats and the Madonnas and the punk scene. It was original, it was unique and it was on fire."

If you have a chance to see the exhibit or plan to go see it, I would love to hear from you. The Madonna NYC83 exhibit runs November 15 to December 15, 2013. 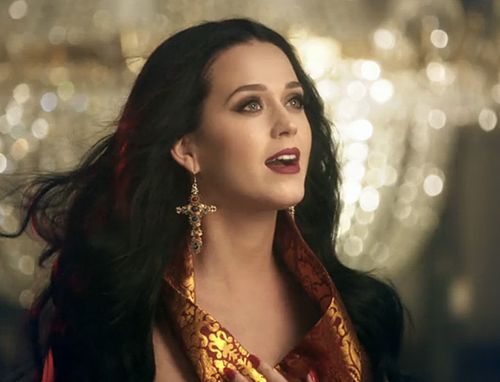 Even though our beloved Candy Queen can be cheeky and appropriate silly at times, there's a consistent whimsical quality to Katy Perry's imagery that paints a fantasy world for fans to escape in. The freshly-released music video for the pop superstar's new single "Unconditionally" is a perfect example of that. Following her rumble in the jungle for "Roar," Perry makes a visual one-eighty to reveal a stylish and demure music video that perfectly fits the poignant sentiment of the song.

Directed by Brent Bonacorso, the video is a beautiful montage of Vogue-worthy fashion moments that Anna Wintour would approve of. Perry's stylist Johnny Wujek dressed the pop star in Chanel, Dolce & Gabbana and Wes Gordon to turn Perry into a modern-day Anna Karenina to add a hint of Russian Romanticism and Tolstoy-esque naturalism to the video's immaculately-executed aesthetic. Wujek tells MTV News that he treated every scene in the video as a fashion editorial. "Each frame was its own cinematic moment," he explains. "Each dress told a story. She was beautiful and dramatic, she was strong."

Taking viewers to 19th century Russia, the video does not have one single storyline, but captures different scenes and looks that show the impact and power of unconditional love - from a bed going up in flames amidst soldier dancers to Perry's withstanding a head-on car crash. One of the video's most gorgeous moments is when Perry unleashes a flower bomb that adds color to the video's deliberately demure setting. The result is simply breathtaking, making the video for "Unconditionally" one of her finest music videos to date.